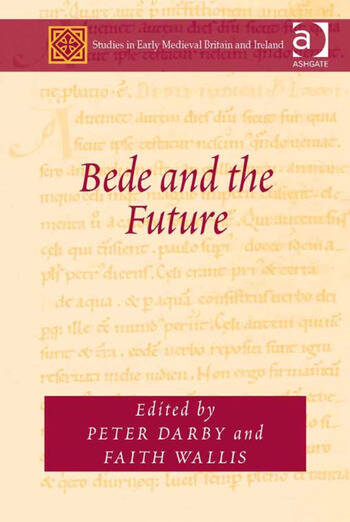 Bede and the Future

Bede (c. 673-735) was Anglo-Saxon England’s most prominent scholar, and his body of work is among the most important intellectual achievements of the entire Middle Ages. Bede and the Future brings together an international group of Bede scholars to examine a number of questions about Bede’s attitude towards, and ideas about, the time to come. This encompasses the short-term future (Bede’s own lifetime and the time soon after his death) and the end of time. Whilst recognising that these temporal perspectives may not be completely distinct, the volume shows how Bede’s understanding of their relationship undoubtedly changed over the course of his life. Each chapter examines a distinct aspect of the subject, whilst at the same time complementing the other essays, resulting in a comprehensive and coherent volume. In so doing the volume asks (and answers) new questions about Bede and his ideas about the future, and will undoubtedly stimulate further research in this field.

Peter Darby is Lecturer in Medieval History at the University of Nottingham, having formerly held a British Academy Postdoctoral Fellowship at the University of Leicester. His research interests focus on ecclesiastical history, with a particular emphasis upon Anglo-Saxon England and the writings of Bede. He is the author of Bede and the End of Time (Ashgate, 2012). Faith Wallis is Associate Professor in the Department of History and Classical Studies at McGill University, Montreal. She has written widely on the history of science and medicine and has published translations of Bede’s On the Reckoning of Time, Commentary on Revelation and (with Calvin B. Kendall) On the Nature of Things and on Times.

'These essays ... extensively discuss and analyze Bede’s concerns about the time to come in a variety of contexts. Although Bede himself presents history and eschatology clearly, these related essays show how complex and involved those subjects were and how adroitly Bede treated them as he augmented the fathers’ analyses.' Speculum

Bede and the Future