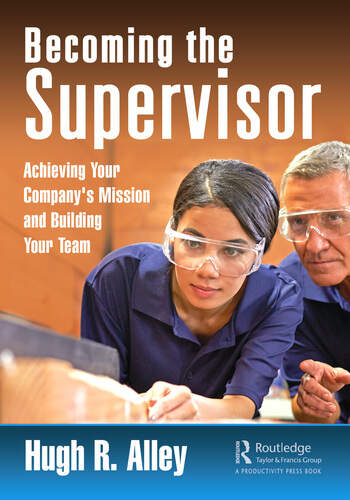 Becoming the Supervisor: Achieving Your Company's Mission and Building Your Team

This book tells the story of Trevor who works as one of the production team in a small company that makes toy boats. He is thrust into the role of supervisor unexpectedly when his general manager reacts to his constant suggestions of how things could be better. When the GM gets ill, Trevor struggles for several months. Then a new GM arrives, and the core of the book is Trevor’s growth under the coaching of his new GM, Julie. As Trevor deals with one challenge after another, Julie guides him on a journey to learn the core skills needed by all front-line leaders.

The reader takes away four key ideas: 1) Front-line leadership skills are not too complicated to learn. 2) These skills are something that they can develop in themselves, regardless of what their organization does. 3) Tools and skills are there to help solve real business problems; implementing the tools is not a strategy. 4) In your role as supervisor (directing or responsible for others) you have to look after the mission of the company AND look after your people – doing only one is not an option.

Essentially, this book is intended to give hope to a new supervisor or team lead. They will finish the book knowing that the skills they need can be learned and aren’t that difficult. It is designed to introduce the central skills that any supervisor has to be able to accomplish at least with a basic working competency: instructing, leading, and making improvements in their own area. It introduces some of the more widely-used tools that a new supervisor may run into. More importantly, it ties these tools and skills to solving particular problems. Readers will understand that the tools are not important for their own sake, but only to the extent that the tools serve the larger objective of the organization.

The book is designed to give the reader an entertaining and hopeful story about the very difficult transition from worker to supervisor, from being one of the crew to directing the crew. It is an emotionally tough transition, and the idea that someone could see a model of how it can work out will be helpful to folks new in a leadership role. Finally, the book provides a reference to other sources of information that will let the reader extend their learning about each of the tools or skills referenced in the book.

List of Figures. List of Tables. Preface. Acknowledgements. About the Author. Chapter 1 You Be The Supervisor. Chapter 2 The First Four Months. Chapter 3 A New Boss. Chapter 4 The First Meetings. Chapter 5 The Observations. Chapter 6 The Morning Meeting. Chapter 7 He Quit – Learning to Instruct. Chapter 8 Making Improvements. Chapter 9 Improvements in My Area. Chapter 10 The Problem Child. Chapter 11 The Accident. Chapter 12 Collisions. Epilogue.

Hugh R. Alley, P.Eng., is president and founder of First Line Training Inc. The company helps clients improve productivity and profits by building the skills of managers and supervisors. Hugh is an industrial engineer and has worked for over 25 years in a wide range of manufacturing settings. He has been a manager, a consultant, and a business owner. He has helped many organizations make significant gains in productivity.

Prior to starting First Line Training in 2011, Hugh was Operations Manager and part owner of a manufacturing firm in Langley with 70 – 120 employees. Over 3 years the company reduced its lead time by 25%, its accident rate by 95%, and saw measured gains in productivity of 10 - 12% per year. Before that he worked as part of Grant Thornton LLP’s manufacturing and distribution consulting practice. He spent five years working with the WCB of BC in a range of roles including managing staff development, managing a claims unit and running several large projects. Prior to joining the WCB he spent five years running his own consulting industrial engineering firm.

Hugh obtained his B.A.Sc. at University of Waterloo (Systems Design Engineering) and earned an M.Sc. in resource economics at Cornell, and a Master of Divinity at Vancouver School of Theology. Hugh has taught at UBC, SFU and BCIT. He writes a regular column for PLANT Magazine, and writes and presents frequently on the topics of staff development, training, lean manufacturing and quality.

"Great story of a turnaround of a company using the TWI JI, JR, JM and Kata methodologies. Very enjoyable read with ideas that can be implemented quickly in any company."

"In a heart warming, easy to read story Alley has made the concepts of TWI (Training Within Industry) easy to understand and more importantly gives you a sense of how transformational TWI can be. Whether you are a first line Supervisor or General Manager, experienced or brand new, this book gives you the tools and practices to be better at your job."

"The questions for reflection at the end of each chapter will be helpful for leaders at many different levels, whether new or experienced. The supervisory tools introduced in the book are practical and effective."

"A great read, a great story, great lessons, and powerful learning for new and experienced supervisors. I couldn’t wait to see how it ended!"

Becoming the Supervisor: Achieving Your Company's Mission and Building Your Team