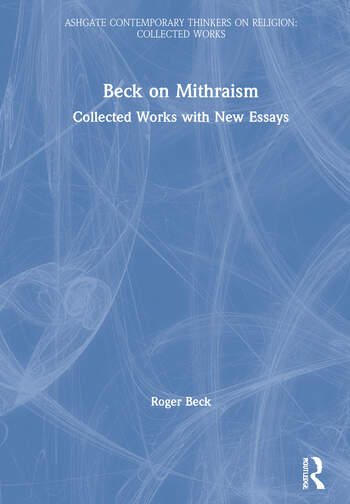 Roger Beck, a world authority on Mithraism, brings together his major writings on the Mysteries of Mithras in the context of the culture and religions of imperial Rome. In these studies he opens new vistas on myth making, ritual, symbolism, the role of astrology in the cult, recently discovered Mithraic monuments and artefacts, and the emergence of Mithraism and Christianity concurrently in the first century. Beck offers new introductions to his thematically framed groups of writings and adds six entirely new essays published here for the first time. These essays link his research to contemporary studies in cognitive science of religion and anthropology of religion. This collection will appeal particularly to scholars exploring contemporary aspects in anthropology of religion, astronomy and astrology, cults and myths, images and symbols, as well as traditional scholars of Greco-Roman antiquity and Christian origins.

Contents: Introduction; Part A The Scholarly Scene: Mithraism since 'Mithraism since Franz Cumont'. Part B Foundation: Introduction; The Mysteries of Mithras; A summary description of the Mysteries of Mithras in six propositions. Part C Mythmaking and Other Fictions: Introduction; Ritual, myth, doctrine and initiation in the Mysteries of Mithras; History into fiction; Apuleius the novelist, Apuleius the Ostian householder, and the Mithraeum of the Seven Spheres. Part D Mithras and the Heavens,1; First explorations: Introduction; 'The Seat of Mithras at the Equinoxes'; Cautes and Cautopates; Interpreting the Ponza Zodiac, I; Interpreting the Ponza Zodiac, II. Part E Mithras and the Heavens, 2: Quis Ille?: The rise and fall of the astral identifications of the tauroctonous Mithras; Astral symbolism in the tauroctony; In the place of the lion. Part F The Astronomical and Astrological Matrix: Introduction; The astronomical design of Karakush, a royal burial site in ancient Commagene; Whose astrology? The imprint of Ti. Claudius Balbillus on the Mithraic mysteries. Part G Eikona Kosmou: The Mithraeum: Introduction; Cosmic models; Qui mortalitatis causa convenerunt. Index.

Roger Beck is Professor Emeritus at the University of Toronto at Mississauga, Canada.

'Beck's essays on Mithraism are lucid, elegant, original and persuasive. Gathering them into one volume will reinforce his reputation as an outstanding scholar in this field. The addition of new essays and reflective introductions to the various sections of the book will make more accessible the extent, depth and coherence of his work. They will also demonstrate a hallmark of Beck's work - his constant search for new and more sophisticated ways of understanding the ancient evidence. His is a mind on the move.' I predict it will become a standard reference work in the field of Mithraic studies.' Stephen Wilson, Professor, Carleton University, Ottawa, Canada 'I would see this as a very worthy project from one of the world's leading experts in Mithraism, with a very distinct and consistent approach, and with a large following of scholars who read his articles and books.' Frederick Brenk, S.J., Pontifical Biblical Institute, Romer, Italy 'Roger Beck's suggestive and influential contributions to the study of Mithraism are well known; in gathering them together he has added a number of important new studies that not only bring the earlier studies up to date but tie the whole together. The resulting volume attractively indicates how texts and realia can offer new insights into the analysis of one of the most important "new" religions of antiquity. It affords fresh insights into the examination of early Christianity and Greco-Roman religion, especially their astronomical and astrological features. All in all, it is an important and perceptive discussion of myth making in antiquity.' Peter Richardson, Professor Emeritus, University of Toronto, Canada 'Roger Beck is a leading scholar in the field of Mithraic Studies. His publications have brought decisive progress in a complicated and often controversial realm of scholarship. I very much welcome the project to collect and to publish Roger Beck's Mithraic studies in one volume.' Walter Burkert, Emeritus Professor, University of Zurich, Switzerland. 'Professor Beck brings to this task a wealth of knowledge and experience. His work over the past 25 years or so on the Roman cult of Mithras has placed him internationally in the top rank of scholars of this ancient astral religion, and certainly the leading English-language guide. Not only will the book usefully bring together in one place a number of seminal articles which are scattered in various publications, but it also promises both to update the critical survey of Mithraism which Professor Beck first made in 1984, and to be innovative in its interpretation of the cult. As always with Professor Beck's work, I anticipate that the new interpretations will be soundly grounded in a deep appreciation of the cultural mind-set of the time.' Robert Hannah, Professor, University of Otago, New Zealand 'Among historians of religions and classical or Iranian scholars Beck is recognized as the world authority on Mithraism. The core of his achievement lies in the decipherment of symbols, either astronomical, cognitive, or imagistic. For thirty years his spirit has been that of a pioneer and a marshal in the same time: opening new paths and redressing the balance. A wave of ground-breaking ideas enlivens this collection of studies from the first page to the last.' Giovanni Casadio, Professor of the History of Religions, University of Salerno, Italy 'Roger Beck has been one of the most significant and creative writers over the past 30 years not only specifically in Mithraism, but more broadly in the study of ancient 'paganisms'. He has been responsible, mostly single-handed, for establishing that Mithraism had a significant astronomical component. It is an excellent idea to add the new sections to this collection, which will locate his discoveries in the context of his more recent thinking, centred on the subject of cult formation. This is sophisticated and original work, which is of interest to a wide range of scholars. This volume will bring it to the attention of a wider audience.' Dr Simon Price, Lady Margaret Hall, Oxford