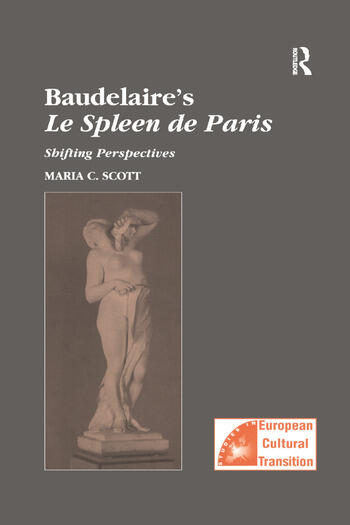 Maria Scott's study of the operation of irony in Baudelaire's Le Spleen de Paris contends that the principal target of the collection's spleen is its own readership. Baudelaire, as one of the most perceptive cultural commentators of the nineteenth century, was naturally very keenly aware of the growing dominance of the bourgeoisie in France, not least as a market for art and literature. Despite being dependent on this market for his own writing, the poet was highly critical of bourgeois values and attitudes. Scott builds on existing criticism of the collection to argue that these are indirectly mocked in Le Spleen de Paris, often in the person of the poet's supposed textual alter ego. The contention is that the prose poems betray the trust of readers by way of an apparent transparency of meaning that functions to blind us to their embedded irony. Though focused on Le Spleen de Paris, Scott's study engages with the full range of Baudelaire's writings, including his art and literary criticism. Her book will be of interest not only to Baudelaire scholars but also to those engaged more generally with nineteenth-century French culture.

Maria Scott is Lecturer in French at the National University of Ireland, Galway.

Prize: Winner of the R.H. Gapper Book Prize 2007 'This is a thought-provoking book, which advances ideas in an understated manner, and leaves us to ponder the implications. The Baudelaire who emerges is profoundly ethical, an advocate of self-knowledge, and deeply protective of his more Romantic artistic ideals. Scott shows how he uses textual duplicity to enact and entrap bourgeois hypocrisy, and her main concern is to expose the reading dynamic rather than to impose an ideological agenda. The book is lucidly written throughout and is a valuable contribution to the expanding body of work on Baudelaire's prose.' French Studies 'Maria Scott's insightful and engaging interpretation of Le Spleen de Paris opens up the text to new and original readings, whilst offering an incisive critique of the existing scholarship in the field. In its elegantly written, cogent and subtle analyses, Scott's book offers an explanation of the reader blindness and competing perspectives that the prose poems provoke and re-frames the critical debate in illuminating and alluring ways. Full of fascinating and persuasive readings of individual prose poems, Baudelaire's Le Spleen de Paris also makes an important contribution to our understanding of Baudelairean duplicity and to the highly productive critical unease it generates.' Sonya Stephens, Reader in Modern French Literature and Culture, Royal Holloway, University of London 'With a wealth of sensitive, original and highly detailed analyses, this is a first-rate addition to the growing number of excellent monographs on Baudelaire’s prose poems...' Forum for Modern Language Studies 'The author appears in total command of the critical corpus that has grown round Le Spleen de Paris and her erudition is nothing if not impressive... there are many pieces of perceptive and nuanced criticism...' Modern Language Review