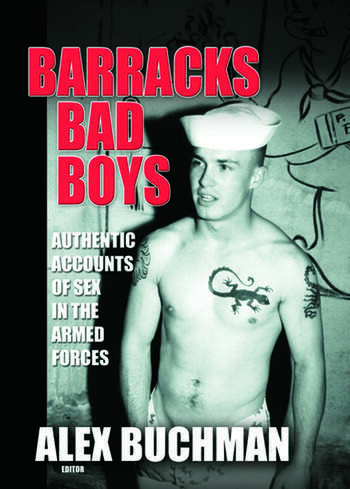 Buchman’s radical approach to an otherwise rigidly formulaic sub-genre: he does the legion of purportedly “true confessions” books with a military theme one better: the first-person narratives he has assembled actually are true.

Boldly defying the conventions of gay male “one-handed reading,” the unembellished chronicles Buchman brings us from the intensely homoerotic secret world of men in uniform are more erotically charged than any porn-by-numbers fantasy.

The theme of Barracks Bad Boys is trouble. All-too-true stories of criminally sexy soldiers and sailors in trouble, who cause trouble, or who just plain are trouble.

The unvarnished accounts of romance with baby-faced deserters bound for the brig make for riveting reading. Equally gripping is the disarmingly candid pillow talk of young military men whose trouble runs deeper than mere “unauthorized absence” or “indecent acts.”

Some of the surprises you’ll encounter in Barracks Bad Boys include: By turns hair-raising and wrenching, poignant and laugh-out-loud funny, these authentic accounts of sex in the Armed Forces are sure to elicit one universal reaction: no one could make this up!

Barracks Bad Boys is compulsory reading for anyone interested in men in uniform; human sexuality in the military; and cutting-edge nonfiction literary erotica.