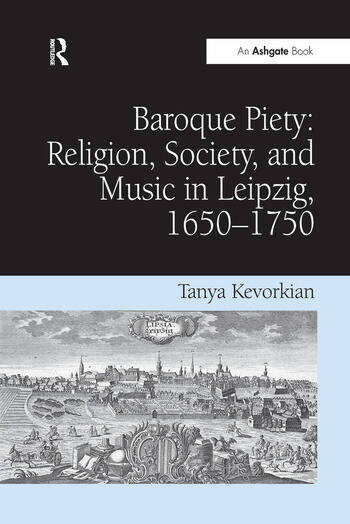 Drawing upon a rich array of sources from archives in Leipzig, Dresden and Halle, Tanya Kevorkian illuminates culture in Leipzig before and during J.S. Bach's time in the city. Working with these sources, she has been able to reconstruct the contexts of Baroque and Pietist cultures at key periods in their development much more specifically than has been done previously. Kevorkian shows that high Baroque culture emerged through a combination of traditional frameworks and practices, and an infusion of change that set in after 1680. Among other forms of change, new secular arenas appeared, influencing church music and provoking reactions from Pietists, who developed alternative meeting, networking and liturgical styles. The book focuses on the everyday practices and active roles of audiences in public religious life. It examines music performance and reception from the perspectives of both 'ordinary' people and elites. Church services are studied in detail, providing a broad sense of how people behaved and listened to the music. Kevorkian also reconstructs the world of patronage and power of city councillors and clerics as they interacted with other Leipzig inhabitants, thereby illuminating the working environment of J.S. Bach, Telemann and other musicians. In addition, Kevorkian reconstructs the social history of Pietists in Leipzig from 1688 to the 1730s.

Contents: Introduction; Part I Congregants' Everyday Practices: The experience of the service; Seating the religious public: church pews and society. Part II The Producers: The clergy, the city council, and Leipzig inhabitants; Elites in and beyond Leipzig: the Dresden court and the consistories; Leipzig's cantors: status, politics and the adiaphora. Part III The Pietist Alternative: Sociability and religious protest: the collegia pietatatis of 1689-1690; The Pietist shadow network. Part IV The Construction Boom and Beyond: Social change and religious life; Conclusion; Bibliography; Index.

Prize: Winner of the 2008 William H. Scheide Prize of the American Bach Society Shortlisted for the AMS Lewis Lockwood Award 2008. ’Through personal accounts, Kevorkian paints a detailed and intimate picture of religious activity across the strata of civic society. The story of Leipzig's public religious culture to 1750 emerges as one of great diversity and flux in a period of relative peace and economic prosperity.... Readers from social, political, and religious history should not be put off by the prominence of music in the title, and indeed, this review. ...a valuable social history. Music, in Kevorkian's book, as it was in Leipzig society, is but one thread in the rich fabric of public pious culture.’ H-German ’In sum, Kevorkian has done important research in specific areas such as pewholding, consistory and city council records, and Pietist correspondence that enrich our understanding of religious affairs in Leipzig in the late seventeenth and early eighteenth centuries... it is a significant addition to the scholarly literature in the field.’ Journal of the American Musicological Society ’... this book provides a highly stimulating historical resource that will undoubtedly inflect many musical studies of Bach and his predecessors over the coming years.’ Early Music ’A valuable contribution to Ashgate's growing catalogue of interdisciplinary studies... Baroque Piety provides new insight into how we consider the religious arena in early modern Europe.’ Renaissance Quarterly ’Music forms only one strand of Kevorkian’s interdisciplinary study, yet by considering Bach’s work within the religious life of Leipzig, she offers a model of how music can be integrated within social history. ... [Kevorkian's] book is not only a sure-footed account of the religious sphere in which Bach worked, it should also stimulate new directions in research on eighteenth-century German music.’ Eighteenth-Century Music ’Having a broad sweep of Kevorkian