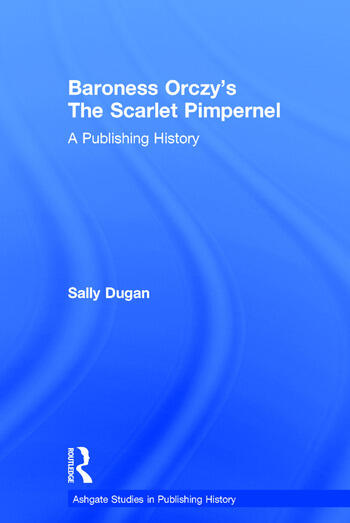 Since its publication in 1905, The Scarlet Pimpernel has experienced global success, not only as a novel but in theatrical and film adaptations. Sally Dugan charts the history of Baroness Orczy's elusive hero, from the novel's origins through its continuing afterlife, including postmodern appropriations of the myth. Drawing on archival research in Britain, the United States and Australia, her study shows for the first time how Orczy's nationalistic superhero was originally conceived as an anarchist Pole plotting against Tsarist Russia, rather than a counter-revolutionary Englishman. Dugan explores the unique blend of anarchy, myth and magic that emerged from the story's astonishing and complex beginnings and analyses the enduring elements of the legend. To his creator, the Pimpernel was not simply a swashbuckling hero but an English gentleman spreading English values among benighted savages. Dugan investigates the mystery of why this imperialist crusader has not only survived the decline of the meta-narratives surrounding his birth, but also continues to enthrall a multinational audience. Offering readers insights into the Pimpernel's appearances in print, in film and on the stage, Dugan provides a nuanced picture of the trope of the Scarlet Pimpernel and an explanation of the phenomenon's durability.

Sally Dugan took her doctorate at Birkbeck, University of London. She is a visiting research fellow at the Institute of English Studies and an Associate Lecturer at Oxford Brookes University.

'This well-researched and lucidly written study traces the origins of the story and its variegated history in fiction, drama, and film, exploring how the author and her publishers adapted the tales to suit various markets. The analysis offers particularly valuable insights into the mass-reading public of the early twentieth century. Sally Dugan creates a convincing explication of the staying power of an unlikely popular myth. This work will interest students of publishing history, cultural studies, and popular entertainment.' Judith Fisher, Trinity University, San Antonio, TX, USA ’... [a] highly enjoyable, exhaustively researched publishing history...’ Times Literary Supplement '... this is an excellent work, in that it takes one best-selling and really influential novel, and explores all of its aspects: its author’s life, its predecessors, its own influences, its spin-offs, its reuse in two world wars, and its fabulous marketing campaigns. I do like a period dust jacket: the many lovely reproductions of The Scarlet Pimpernel’s covers in Dugan’s book, through the decades, are evocative and charming... read Sally Dugan for everything you could possibly want to know about The Scarlet Pimpernel.' Vulpes Libris 'The scholarship behind this study is exemplary. Dugan has explored archives in Bristol, Oxford, London, New York, EvanÂ­ston, Austin, and Chapel Hill. She has read over 200 of Orczy’s publications, compared the manuscript of her autobiography to its posthumously published book, reproduced numerous images of dust jackets, theatriÂ­cal posters, and celebrity photographs, and traced - through the various threads of her intricately woven tapestry - insights by the major theorists of culture and book history. [...] Above all, the breadth, depth, complexity, and cultural resonances of Orczy’s Regency hero that this study discloses make it a model of book history, more comprehensive and historically impacted than most.’ SHARP News