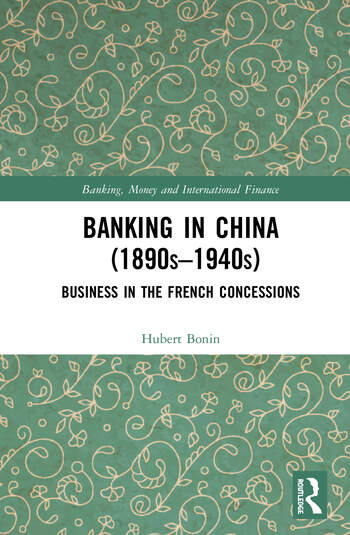 Banking in China 1890s–1940s: Business in the French Concessions

From the 1890s to the 1940s, French State and entrepreneurial companies were enticed to promote French interests, beyond mere colonial targets, for the sake of economic patriotism. Chinese concessions, not including Hong Kong, were thus inserted into geo-economic moves, and French stakeholders asserted their philosophy of competition, and displayed their means of influence and investment. In this book, the author assesses the challenges which confronted French actors in the face of powerful British imperial action overseas, all the more so because German Belgian, Japanese, and then also North-American competitors joined the fray.

The book targets three concessions: Canton/Guangzhou, Tientsin/Tianjin, and Hankeou/Hankow/Wuhan because of their significance in the emergence of a modern economy in the country. The three main sections of the book explore the position of French stakeholders, mainly businessmen, merchant houses, bankers, and a few industrialists, in these three port-cities and China overall. The chapters gauge their capital of influence and networking, commercial tools, and banking skills in the face of competition, the hardships of crossing the changes in economic productive systems or clusters in the various port-cities and their areas, rich with commercial offshoots. Also, several chapters underscore the uncertainties caused by geopolitical and military events in China. For each of the three concessions, commercial and banking systems, assessments of the successes and limits of the French bankers and merchants are investigated, with the aim of evaluating the reality of French entrepreneurialism and power in the regions prospected by the offshoots of French capitalism.

The book will be an invaluable resource for academics interested in the history of banking and finance, business, entrepreneurship, colonialism and of "economic patriotism", in Chinese history, in geoeconomics and in connected history.

Part 1. Issues Introduction 1. Launching business offensives in China Part 2. Years of expansion in French concessions (from the 1900s to the 1920s) 2. French business and banking in Guangzhou port city (1900s-1920s): From an offshoot to embeddedness 3. Tianjin as a seducing port-city for French business at the start of the twentieth century 4. Tianjin as a leverage to internationalised markets and to Chinese connections 5. French trade and banking footholds in Hankow. Challenging British hegemony up the Yangtze (1903 to 1920) 6. Hankow banking between economic patriotism and overall business 7. The Banque de l’Indochine’s breakthrough in Hankow Part 3. The rebirth of business in the French concessions in the 1920s 8. A community of business interests resisting civil war in Guangzhou 9. The rebirth of the Guangzhou port cluster 10. Banque de l’Indochine on the Tianjin market-place in the 1920s 11. The effects of the First World War on the Hankow branch 12. A turbulent environment for the Hankow market-place in the 1920s 13. The Hankow branch serving French and foreign companies 14. Corporate banking flourishes in Hankow in the 1920s Part 4. Facing crisis and wars in the 1930s 15. A globalised business community facing hard times in Guangzhou in the 1930s 16. Banque de l’Indochine facing the crisis in Guangzhou in the 1930s 17. Positive reactions to the crisis in Guangzhou 18. Classical business at stake in Guangzhou 19. Tianjin through geo-politics issues (from the mid-1930s till the mid-1940s) 20. Geopolitics versus banking and business in Tianjin? 21.The Tianjin market-place struggling against ordeals in 1939-1945 22. French companies in Hankow facing competition, crises and wars in the 1930s 23. The resilience of the Banque de l’Indochine branch in Hankow (1930-1939) Part 5. From conclusions to further issues 24. The Asian scope of French business and banking (1890s-1940s) 25. French bankers and economic patriotism in the Chinese port-cities (1890s-1930s) 26. Was the strategy of economic patriotism successful? From an imperial bank to an international bank?

Hubert Bonin is a researcher in modern economic history at Sciences Po Bordeaux and at the Gretha research centre at Bordeaux University. His fields are: banking history, business history, economic history of WWI, business and banking in the French concessions in China, Bordeaux wine history and maritime logistics history.

Banking in China 1890s–1940s: Business in the French Concessions