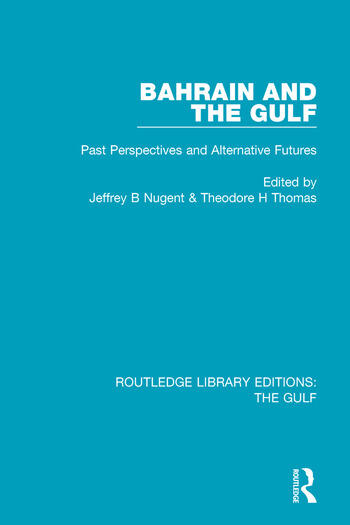 Bahrain and the Gulf: Past, Perspectives and Alternative Futures

After the oil discoveries of the early 1930s, Bahrain rapidly became an oil exporting country with a relatively high income per capita. More recently Bahrain has succeeded in diversifying its oil dominated economy by developing regional banking and other services, and a variety of light and heavy industries. Various circumstances have combined to make Bahrain a leader among the Arab Gulf States in the transformation of traditional Arabic tribal societies into modern social and economic structures. This book, first published in 1985, in exploring the past, present and possible futures of Bahrain and the Gulf, attempts to describe the nature of this transformation. It estimates to what extent Bahrain has merely an outward appearance of modernity, and explores the conflicts between the compelling power of modern values and the pervasive traditional religions. Bahrain is not typical of the Arab countries of the Gulf; it may, however, serve as a gauge of their current position and likely future. It will therefore be valuable to those interested in gaining more insight into the history and politics of the Middle East during this period of rapid change.

Part 1. Introduction  1. Introduction Jeffrey B. Nugent and Theodore H. Thomas  Part 2. The Historical, Social and Cultural Settings  2. A Reconstruction of the Prehistory of Bahrain, Landing Place of Noah John H. Niedercorn  3. Bahrain’s Pearling Industry: How It Was, Why It Was That Way and Its Implications Samar K. Datta and Jeffrey B. Nugent  4. Some Aspects of Social Change and Modernization in Bahrain Shirley B. Taylor  5. The Changing Roles of Arab Women in Bahrain E. James Fordyce, Layla Rhadi, Maurice D. Van Arsdol, Jr and Mary Beard Deming  Part 3. Political Economy and Resource Management  6. The Status of Women in Bahrain: Social and Cultural Considerations Fadwa El Guindi  7. Public Finance in Bahrain from 1935 to 1981 with Special Emphasis on the Allocation of Oil Revenues in the Past, Present and Future Abla Abdel Latif  8. Bahrain and Its Water Resources Russell B. Thornburg  9. An Evaluation of Bahrain’s Major Industries and Their Future Prospects Abdullah Al-Yousef  10. The Financial Center and Its Future Elias T. Ghantus  Part 4. Alternate Economic Futures of Bahrain and the Gulf  11. Singapore as a Model for Bahrain’s Development Humaira Akhtar  12. Normal Growth Patterns and Their Implications for Bahrain’s Future Economic Structure Jeffrey B. Nugent  13. Identifying Critical Issues for Future Planning: The Case of the Gulf Petrochemicals Industries Company Manolete V. Gonzalez  14. Bahrain and the GCC: Lessons in Arab Economic Cooperation A.A. Kubursi and D.W. Butterfield

Bahrain and the Gulf: Past, Perspectives and Alternative Futures