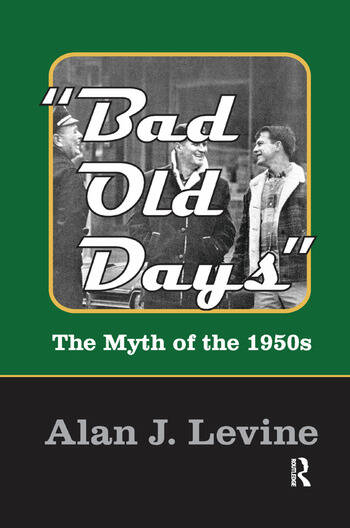 For many, especially those on the political left, the 1950s are the "bad old days." The widely accepted list of what was allegedly wrong with that decade includes the Cold War, McCarthyism, racial segregation, self-satisfied prosperity, and empty materialism. The failings are coupled with ignoring poverty and other social problems, complacency, conformity, the suppression of women, and puritanical attitudes toward sex. In all, the conventional wisdom sees the decade as bland and boring, with commonly accepted people paralyzed with fear of war, Communism, or McCarthyism, or all three.

Alan J. Levine, shows that the commonly accepted picture of the 1950s is flawed. It distorts a critical period of American history. That distortion seems to be dictated by an ideological agenda, including an emotional obsession with a sentimentalized version of the 1960s that in turn requires maintaining a particular, misleading view of the post-World War II era that preceded it. Levine argues that a critical view of the 1950s is embedded in an unwillingness to realistically evaluate the evolution of American society since the 1960s. Many--and not only liberals and those further to the left--desperately desire to avoid seeing, or admitting, just how badly many things have gone in the United States since the 1960s.

Bad Old Days shows that the conventional view of the 1950s stands in opposition to the reality of the decade. Far from being the dismal prelude to a glorious period of progress, the postwar period of the late 1940s and 1950s was an era of unprecedented progress and prosperity. This era was then derailed by catastrophic political and economic misjudgments and a drastic shift in the national ethos that contributed nothing, or less than nothing, to a better world.

1. The Myth and the Problem
2. The Post-World War II Era: Its Characteristics, Achievements, and Problems
3. Race: The Great American Obsession
4. The Myth of McCarthyism
5. Prosperity and Poverty in the Postwar Era
6. Men and Women
7. Conformity, the "Silent Generation," Liberalism, and Social Criticism
8. Postwar Culture
9. Seeds of Disintegration?
10. Post-Sputnik "Declinism"
11. Those Suburbs Suburbia, Disturbia, and the Slurbs
12. Cars: Getting Around, Gorp, and the "Vaginal Look"
13. The Economy and Industry in the Postwar Era
Index