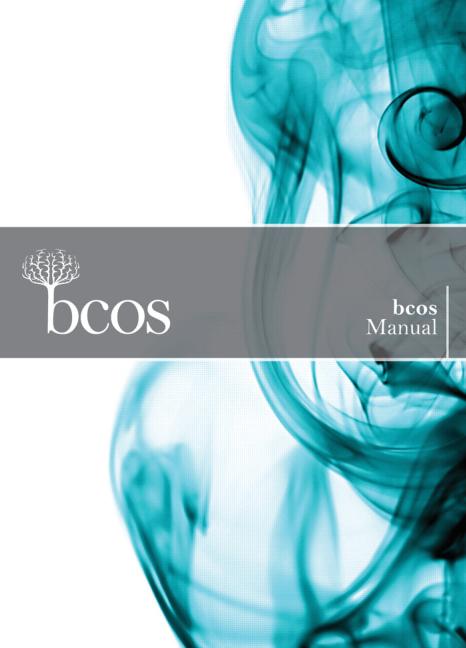 Following different kinds of brain damage, including stroke, head injury, carbon monoxide poisoning, and degenerative change, people can experience a range of cognitive problems, in addition to any difficulties in motor function. These problems strongly influence a patient’s ability to recover, but often patients are not routinely screened to detect them.

Developed to screen patients for cognitive problems, it provides a novel 'cognitive profile' across a range of cognitive processes within a one-hour testing session, that will indicate whether a patient has a clinical impairment (related to norms) in five primary domains of cognition:

BCoS has been validated against ‘standard’ neuropsychological tests used to measure similar cognitive functions. It has also been used for prognostic modelling, and assessed against measures of cognition and activities of everyday living for patients in the chronic stage.

The first test of its kind, BCoS is an invaluable tool for neuropsychologists, neuropsychiatrists, occupational and speech therapists, and a wide range of other clinical practitioners.

Training on administration of the assessment is available from http://www.cognitionmatters.co.uk/

The following items are available as free downloads from http://www.cognitionmatters.co.uk/ or buy them from Psychology Press:

BCoS is supported by the Stroke Association, http://www.stroke.org.uk/

Wai-Ling Bickerton is an occupational therapist who has worked as a clinician and a researcher. From 2002-2012, Wai-Ling helped develop the BCoS, assessed patients and trained health professionals from worldwide with the tool. Since 1992, she has managed large scale multi-centred research projects in psychiatry, neuro-rehabilitation and neuropsychology throughout the UK and Hong Kong, covering acute hospitals to long term community care.

"A useful tool for Speech and Language Therapists working in isolation to gain an understanding of a client’s cognitive skills and how this affects communication." - Jen Johnson, The Royal Hospital from Neuro-disability, UK, in Bulletin, The official magazine of The Royal College of Speech & Language Therapists

"This is an important collection of stroke-appropriate cognitive testing materials and represents state-of-the-art cognitive neuropsychological theory put to clinical use. BCoS will be especially valuable in helping patients and family members understand the consequences of a stroke, it will foster communication about cognitive difficulties with the patient’s carers, and will support the identification of rehabilitation strategies." - Andrew Bateman, of the Oliver Zangwill Centre for Neuropsychological Rehabilitation