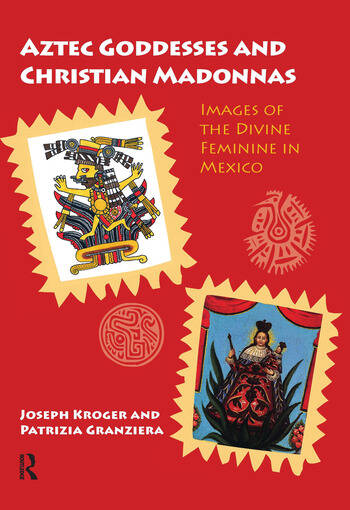 Aztec Goddesses and Christian Madonnas: Images of the Divine Feminine in Mexico

The face of the divine feminine can be found everywhere in Mexico. One of the most striking features of Mexican religious life is the prevalence of images of the Virgin Mother of God. This is partly because the divine feminine played such a prominent role in pre-Hispanic Mexican religion. Goddess images were central to the devotional life of the Aztecs, especially peasants and those living in villages outside the central city of Tenochtitlan (present day Mexico City). In these rural communities fertility and fecundity, more than war rituals and sacrificial tribute, were the main focus of cultic activity. Both Aztec goddesses and the Christian Madonnas who replaced them were associated, and sometimes identified, with nature and the environment: the earth, water, trees and other sources of creativity and vitality. This book uncovers the myths and images of 22 Aztec Goddesses and 28 Christian Madonnas of Mexico. Their rich and symbolic meaning is revealed by placing them in the context of the religious worldviews in which they appear and by situating them within the devotional life of the faithful for whom they function as powerful mediators of divine grace and terror.

Contents: Introduction: the divine feminine; The Goddess in pre-Hispanic Mexico; The Mother of God in the Christian tradition; The Mexican encounter: from conflict to syncretism; Aztec goddess images; Christian Madonna images; Bibliography; Index.

Joseph Kroger is Professor of Religious Studies at St. Michael's College in Colchester Vermont, where he teaches and does research on Christian theology and the encounter of Christianity with other religions and cultures. He taught for three years as Visiting Professor in the Department of Philosophy and Literature at the University of the Americas (UDLA) in Puebla Mexico. He has published articles on liberation theology and the indigenous religious traditions of Guatemala and Mexico. Patrizia Granziera is a full time Professor of Art History at the University of Morelos, Cuernavaca, Mexico. She has her Ph.D. in Art History from the University of Warwick (England). Her research focuses on the iconography of gardens and landscapes in Europe and Mexico and on the relationship of the Virgin Mary and Pre-hispanic goddesses to nature and the environment. She has published widely on this topic in journals such as the Journal of Intercultural Studies, Garden History, Landscape Research, World Christianity, Esoterica: The Journal, Diaspora.

’This book insightfully places the myths and images of goddesses and madonnas in their cultural contexts. We are in the authors' debt for assembling these scattered pieces so we might imagine a complex tapestry .The clash of symbols and cultures between the Europeans and the conquered peoples was both violent and subjugating. Yet the hybridization of these wildly different cultural images points a way to a present retrieval of the feminine sacred in our fractured world.’ Terrence W. Tilley, Fordham University, USA '... this is not a typical spiritual journey to the goddess� book. Preliminary chapters detail the multiple motifs of the goddess of pre-Hispanic Mexico from the beneficent fecundity to violent destruction, as well as the history and iconography of the Virgin Mary as victorious champion and compassionate mother... The volume is highlighted throughout with black-and-white and color illustrations, including many photographed by the authors. Summing Up: Recommended. Graduate students and above.' Choice 'Aztec Goddesses and Christian Madonnas is accessible, clearly written, and well organized. It is also lavishly illustrated, containing close to three dozen color plates and more than a hundred black-and-white images. It is a useful reference source for studies of the sacred female in medieval and early modern Catholic art as much as in Mesoamerican art and ritual.' CAA Reviews ’I applaud Kroger and Granziera on this work. This book will serve well as a textbook to introduce religious images and concepts in early Mexico, mythologies of goddesses from various parts of the world and how Madonnas have related historically with the various mythologies and cultural contexts in which they are found. This co-authored text confirms many thoughts I have held about the roles of goddesses and Madonnas in Mexico. Thankfully, this team has conducted both thorough and in-depth research in creating a beautiful and comprehensive book.’ Journal of the American

Aztec Goddesses and Christian Madonnas: Images of the Divine Feminine in Mexico