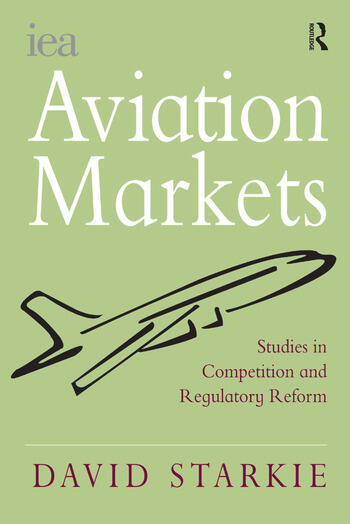 Aviation Markets: Studies in Competition and Regulatory Reform is a collection of 17 papers selected from David Starkie's extensive writings over the last 25 years. Previously published material has been extensively edited and adapted, and combined with new material, published here for the first time. The book is divided into five sections, each featuring an original overview chapter, to better establish the background and also explain the papers' wider significance including, wherever appropriate, their relevance to current policy issues. These papers have been selected to illustrate a significant theme that has been relatively neglected thus far in both aviation and industrial economics: the role of the market and its interplay with the development of economic policy in the context of a dynamic but partly price regulated industry. The result provides a strong flavour of how market mechanisms, and particularly competition, can operate to successfully resolve policy issues. The book will be of interest to academics and those engaged in the formulation of aviation policy, such as public administrators and consultants, as well as those working in the aviation industry. It is also relevant to economic studies in a more general context, particularly to students and practitioners in industrial organisation economics, including those studying and researching the public utility industries.

David Starkie is a senior associate of Case Associates, London. During the last 20 years he has been a director of several economic consultancies and undertaken work for both private and public sector clients including: the CAA, IATA, European Commission, BAA plc, British Airways, Virgin Atlantic, Qantas, Air New Zealand. He has worked extensively on the regulation of airports in the UK, Australia, New Zealand and South Africa, and since early 2001 has been economic adviser to the Commission for Aviation Regulation, the regulator for Irish airports. More recently, he was on the CAA's panel of advisers for its review of the NATS price cap. Apart from a two-year contract with the Western Australian government, when he served as deputy to the Director-General of Transport, he followed a mainly academic career until 1985 and was, latterly, Professorial Fellow in the Department of Economics at the University of Adelaide and Research Associate at the Institute for Fiscal Studies, London. During his career he has also served on a number of government committees and has advised select committees of the House of Commons on more than a dozen inquiries covering wide-ranging subjects, including: airline CRSs, US/UK aviation bi-laterals, and both UK and EU aviation policies. A graduate and post-graduate of the London School of Economics, he is a member of the Royal Economic Society and the author of many papers and books. He has been co-editor of the Journal of Transport Economics and Policy since 1997.

'The UK's foremost aviation economist combines economic theory and empirical evidence to argue for less onerous regulation of airports and airlines and a greater role for competitive markets. The standard of economic analysis in these papers is a model for aviation policymakers everywhere.' Stephen Littlechild, University of Birmingham, and University of Cambridge 'David Starkie is a leading thinker in aviation matters, contributing for over 30 years. His work has influenced the evolution of aviation and airport policy and regulation in the UK and elsewhere. This volume represents a collection of his contributions and provides an excellent and accessible analysis of the major aviation issues and challenges today. It is a lucid, elegant book, a "must read" for everyone in the aviation industry.' David Gillen, University of British Columbia, Vancouver, Canada 'David Starkie's work has set the standards in the economic analysis of aviation policy for many years now. It is characterised by the application of clear principles and careful reasoning to the specific factual contexts of aviation markets, and by the resulting coherence and practicality of its findings and conclusions. This collection of papers should be an indispensable source of wisdom for anyone interested in the making of public policy.' George Yarrow, Director, Regulatory Policy Institute, Oxford, UK 'There is no doubt that Professor Starkie has sound knowledge of the areas he covers and some strong views which he expresses eloquently and the book will make for a very interesting read for those with a professional interest in the areas he covers.' Transport Economist, Summer, 2008 'The papers are well-written and closely argued as one would expect from an author with Starkie's background and reputation. Although many date back quite a long way, most address issues that remain relevant - and because of their clarity of exposition and the updated commentary which links them - they offer insigh