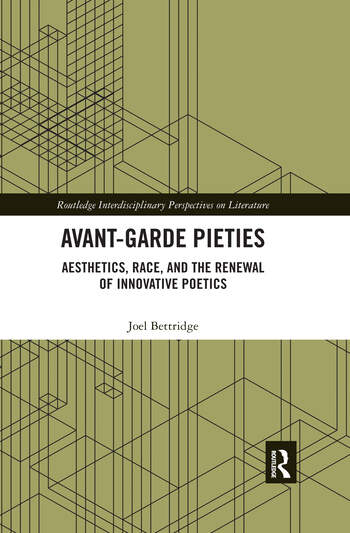 Avant-Garde Pieties: Aesthetics, Race, and the Renewal of Innovative Poetics

Avant-Garde Pieties tells a new story about innovative poetry; it argues that the avant-garde—now more than a century old—persists in its ability to nurture interesting, provocative, meaningful, and moving poems, despite its profound cultural failings and its self-devouring theoretical compulsions. It can do so because a humanistic strain of its radical poetics compels adherents to argue over the meaning of their shared political and aesthetic beliefs. In ways that can be productively thought of as religious in structure, this process fosters a perpetual state of crisis and renewal, always returning innovative poetry to its founding modernist commitments as a way to debate what the avant-garde is—what it should and does look like, and what it should and does value. Consequently, Avant-Garde Pieties makes way for a radical poetics defined not by formal gestures, but by its debate with itself about itself. It is a debate that honors the tradition’s intellectual founding as well as its cultural present, which includes aesthetic multiformity, racialized and gendered modes of authorship, experiences of the sacred, political activism, and generosity in critical disagreement.

Problems and Propositions (On Where We Find the Avant-Garde)

2 Justice from the Ashes (On Juliana Spahr’s and David Buuck’s An Army of Lovers, and Kaia Sand’s Remember to Wave)

3 A Sacred Metaphor and the Values of the Avant-Garde (On Crisis, Renewal, and Multiformity)

4 Case Studies (On Peter O’Leary’s Phosphorescence of Thought, Kenneth Goldsmith’s The Weather, and Claudia Rankine’s Don’t Let Me Be Lonely: An American Lyric)

5 Conclusions and Implications (On Accepting Friendship, Giving up on Moralism, and the Poetics of Generosity)

Joel Bettridge is the author of two books of poetry, That Abrupt Here and Presocratic Blues as well as the critical study, Reading as Belief: Language Writing, Poetics, Faith. He co-edited, with Eric Selinger, Ronald Johnson: Life and Works. He is an Associate Professor of English at Portland State University.

Avant-Garde Pieties offers a sustained critique of the ideologies that fueled historical avant-garde formations, while proposing a method for rethinking the social energies and processes that animate contemporary poetic practice. Bettridge offers a perspective into what feminist theologian Catherine Keller refers to as an "apophatic" understanding, a relational ontology grounded in "disciplined uncertainty." Any U.S. American poetic design in "debate with itself about itself" will have engaged questions of ascendency vis-à-vis stateside exceptionalism, white supremacy, and racial violence. And embodied justice is the poetic response to failures of the overarching enterprises imagined by the historical avant-gardes. Bettridge writes from a situated perspective that makes visible his own commitments but without ever disavowing the self-entangled stakes of whiteness in the enabling stories that structure literary studies.

This book establishes Bettridge as a go-to authority on the fraught contestation of innovation in poetry, and as an adroit critic of an unfolding terrain of formidable originality in current poetics. His focused, and reliable, attention to detail as well as the larger arcs of theoretical issues is commendable.

In Avant-Garde Pieties: Aesthetics, Race, and the Renewal of Innovative Poetics, Joel Bettridge makes an important intervention in debates regarding the formation and continuation of the avant-garde in the 21st century. He speaks particularly to poets, critics, and audiences of poetry engaged in controversies of race, economics, and social justice. By showing the social value and differences of perspective highlighted in contemporary poetic practice, Bettridge enhances our understanding of how the avant-garde can contribute to social change rather than again re-phrasing the now-exhausted formal strategies of defamiliarization that applied to earlier historical moments, but not to our own. He shows that the avant-garde is very much alive particularly in the way socially aware creative strategies can address the reality of our social circumstances today.

Avant-Garde Pieties: Aesthetics, Race, and the Renewal of Innovative Poetics