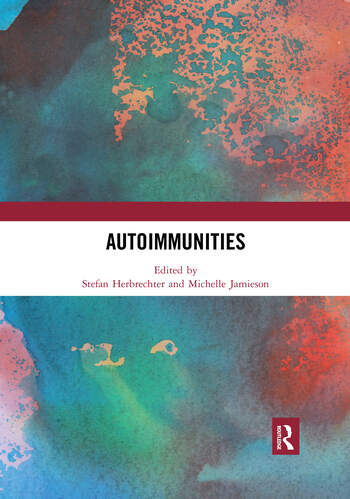 Autoimmunity refers to the phenomenon whereby an organism or body mounts an immune response against its own tissues. As a medical term, autoimmunity is today used to account for any instance in which the body fails to recognise its own constituents as ‘self’, an error that results in the paradoxical situation in which self-defense (immunity, protection) manifests as self-harm (pathology). As a result, the very possibility of autoimmunity poses a problem for the notion of immunity and the concept of identity that underpins it: if self-protection can just as readily take the form of self-destruction, then it seems that the very identity of the self, and thus the boundary between self and other, is in question. Conceptually, autoimmunity thus challenges us to think critically about the nature of any sovereign entity or identity, be they human or nonhuman, cells, nations, or other forms of community.

This volume reflects and engages with different disciplinary approaches to autoimmunity in the theoretical, medical or posthumanities, social and political theory, and critical science studies. It aims to provide a topical intervention within the current discussion on biopolitical thought and critical posthumanist futures.

This book was originally published as a special issue of Parallax.

2. Allergy and Autoimmunity: Rethinking the Normal and the Pathological Michelle Jamieson

3. Self, Not-Self, Not Not-Self But Not Self, or The Knotty Paradoxes of ‘Autoimmunity’: A Genealogical Rumination Ed Cohen

5. Cosmic Topologies of Imitation: From the Horror of Digital Autotoxicus to the Auto-Toxicity of the Social Tony D. Sampson

is a research fellow at Coventry University, UK; a Privatdozent at Heidelberg University, Germany; and general editor of criticalposthumanism.net.

is a sociologist and lecturer in the Faculty of Arts at Macquarie University, Australia.