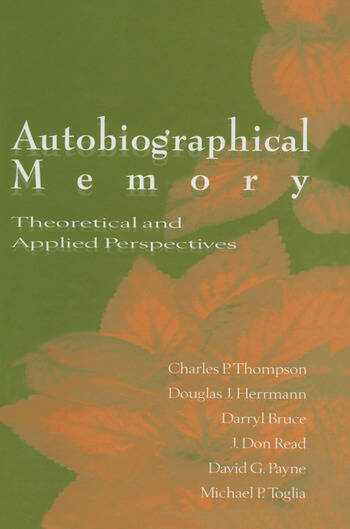 The organization of the first Society for Applied Research in Memory and Cognition (SARMAC) conference centered around two specifically identifiable research topics -- autobiographical memory and eyewitness memory. These two areas -- long-time staples on the menu of investigators of memory in more natural settings -- differ on a variety of dimensions, perhaps most notably in their specific goals for scientific inquiry and application. For many questions about memory and cognition that are of interest to scientific psychology, there have been historical as well as rather arbitrary reasons for their assignment to the autobiographical or eyewitness memory fields.

Perhaps as a result of differing historical orientations, the first volume's seven autobiographical memory chapters focus upon the qualities or types of recall from research participants, whereas the seven chapters in the eyewitness memory volume generally focus upon the quantity (a concern for completeness) and accuracy of recall. This interest in the ultimate end-product and its application within the legal process in general encourages eyewitness memory investigators to modify their testing procedures continually in an attempt to gain even more information from participants about an event. Indeed, several of the eyewitness memory chapters reflect such attempts.

Beyond the specific contributions of each chapter to the literature on autobiographical and eyewitness memory, the editors hope that the reader will come away with some general observations:
* the autobiographical and eyewitness memory fields are thriving;
* these two fields are likely to remain center stage in the further investigation of memory in natural contexts;
* although the autobiographical and eyewitness memory chapters have been segregated in these two volumes, the separation is often more arbitrary than real and connections between the two areas abound;
* the two research traditions are entirely mindful of fundamental laboratory methods, research, and theory -- sometimes drawing their research inspirations from that quarter; and
* the two fields -- though driven largely by everyday memory concerns -- can contribute to a more basic understanding of memory at both an empirical and a theoretical level.

"...the chapters are well-written essays that should be valuable for either undergraduate or graduate psychology students. These books are an excellent introduction to the research literature on autobiographical and eyewitness memory."
—Journal of Mathematical Psychology

"...these two books serve as striking evidence that the fields of autobiographical and eyewitness memory have matured into rich and exciting areas of study. They are clearly far from bankruptcy."
—Contemporary Psychology