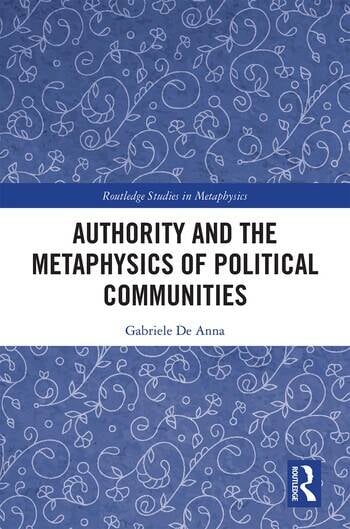 Authority and the Metaphysics of Political Communities

This book explores the metaphysics of political communities. It discusses how and why a plurality of individuals becomes a political unity, what principles or forces keep that unity together, and what threats that unity can be faced with.

In Part I, the author justifies the need for the notion of substance in metaphysics in general and in the metaphysics of politics in particular. He spells out a moderately realist theory of substances and of their principles of unity, which supports substantial gradualism. Part II concerns action theory and the nature of practical reason. The author claims that the acknowledgement of reasons by agents is constitutive of action and that normativity depends on the role of the good in the formation of reasons. Finally, in Part III the author addresses the notion of political community. He claims that the principle of unity of a political community is its authority to give members of the community moral reasons for action. This suggests a middle way between liberal individualism and organicism, and the author demonstrates the significance of this view by discussing current political issues such as the role of religion in the public sphere and the political significance of cultural identity.

Authority and the Metaphysics of Political Communities will be of interest to researchers and advanced students working in social metaphysics, political philosophy, philosophy of action, and philosophy of the social sciences.

2. Degrees of Unity and Substance Gradualism

3. Human Action, Reasons, and the Good

5. Practical Reason and the Problem of Fit

6. Human Action, the Political Community and the Common Good

7. Authority and the Unity of the Political Community

Gabriele De Anna teaches philosophy at the Universities of Udine, Italy, and Bamberg, Germany. He was Marie Curie Fellow at the University of Cambridge (UK) and Visiting Fellow at the Centre for Philosophy of Science (Pittsburgh University, USA). He authored six books in Italian, edited eleven volumes (including Evolutionary Ethics and Contemporary Biology), and published over seventy articles and chapters on metaphysics, action theory political philosophy.

Authority and the Metaphysics of Political Communities