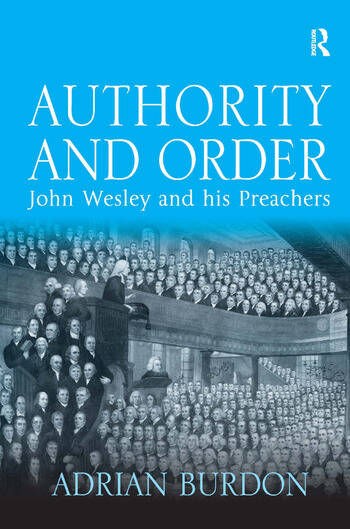 Authority and Order: John Wesley and his Preachers

The important questions in ecumenical dialogue centre upon issues of authority and order. This book uses the development of ministry in the early Methodist Church to explore the origins of the Methodist Order and identify the nature of authority exercised by John Wesley, the founder of the Methodist Church. Showing Methodism as having been founded upon Episcopalian principles, but in a manner reinterpreted by its founder, Adrian Burdon charts the journey made by John Wesley and his people towards the ordination of preachers, which became such a major issue amongst the first Methodist Societies. Implications for understanding the nature and practice of authority and order in modern Methodism are explored, with particular reference to the covenant for unity between English Methodists and the Church of England.

Contents: Introduction; Prologue: 'I am a Church of England man'; Wesley's initial position: authority of rubric and canon; After Aldersgate: authority of a warm-hearted Evangelist; Wesley's assistants: 'sons of the Gospel'; Wesley's expression of authority: 'I am a scriptural Episcopos'; Ordination of the assistants: is it separation from the Church of England?; Wesley reflects upon his actions: 'prophets and priests' - Ireland 1789; The Liturgy: Prayer Book Ordinal adapted; The text: Wesley's adaptation of the Prayer Book Ordinal; Epilogue: 'Be Church of England men still'; Bibliography; Index.

'Every Church has special gifts to bring to the world-wide picture of the Christian life, and Methodism is no exception. In this readable, informative, and well-researched book, Adrian Burdon brings alive the personalities and the structure of ministry that developed in early Methodism, and which have continued to develop down to the present time. There's nothing to beat looking at sources properly, and that includes what Methodists have to say about the nature of the 'connexion', and their ordination services. At a time when Christians are trying to understand each other better, in detail as well as in spirit, Adrian's book is a timely reminder of a rich part of the Christian inheritance.' Rt Revd Kenneth Stevenson, Bishop of Portsmouth 'Adrian Burdon's book makes an important contribution to the present conversations between the Church of England and Methodist Church. He demonstrates the debt owed by John Wesley to his Anglican roots in the shaping of a Methodist movement geared to mission but founded on an episcopalian polity. Wesley's claim for validity and regularity of his innovations, despite his breaking of the rules of his own Church, helps the argument for a flexibility in ministry which addresses questions of orders and church polity, while his exercise of a personal episcope gives scope to charismatic leadership for renewal in church life today.' Tim Macquiban, Principal of Sarum College, Salisbury 'This is an informative read with relates as much to modern ecumenism as it does to the history of the Methodist movement.' Theological Book Review 'This book takes a clearly defined area of the life and work of the charismatic founder of the Methodist Church and explores it in a thorough, well-researched and readable way. It will help Methodists and non-Methodists alike to understand why some aspects of modern Methodism, which has its own distinctive characteristics, are as they are.' The United Reformed Church History Society Journal ’This masterpiec

Authority and Order: John Wesley and his Preachers