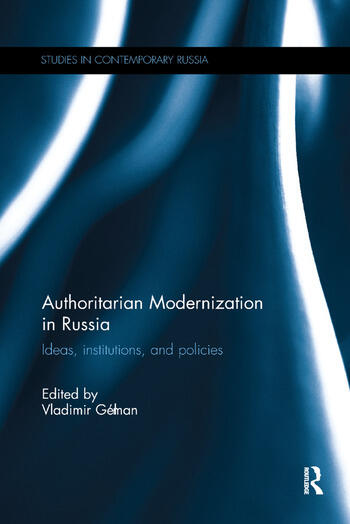 Post-Communist Russia is an instance of the phenomenon of authoritarian modernization project, which is perceived as a set of policies intended to achieve a high level of economic development, while political freedoms remain beyond the current modernization agenda or are postponed to a distant future. Why did Russia (unlike many countries of post-Communist Europe) pursue authoritarian modernization after the Soviet collapse? What is the ideational agenda behind this project and why does it dominate Russia’s post-Communist political landscape? What are the mechanisms of political governance, which maintain this project and how have they adopted and absorbed various democratic institutions and practices? Why has this project brought such diverse results in various policy arenas, and why have the consequences of certain policies become so controversial? Why, despite so many controversies, shortcomings and flaws, has this project remained attractive in the eyes of a large proportion of the Russian elite and ordinary citizens? This volume intended to place some of these questions on the research agenda and propose several answers, encouraging further discussions about the logic and mechanisms of the authoritarian modernization project in post-Communist Russia and its effects on Russia’s politics, economy, and society.

Chapter 1. Introduction: Why Not Authoritarian Modernization in Russia?

Chapter 2. Fathers versus Sons: Generation Changes and the Ideational Agenda of Reforms in Late Twentieth-Century Russia

Chapter 3. The Dilemma of Perception on Russian Strong State and Demand for Modernization

Chapter 5. Authoritarianism and Institutional Decay in Russia: Disruption of Property Rights and the Rule of Law

Chapter 9. How does the Government Implement Unpopular Reforms? Evidence from Education Policy in Russia

Chapter 10. Choosing between Bureaucracy and the Reformers: The Russian Pension Reform of 2001 as a Compromise Squared

Chapter 11. Labour Reform in Putin's Russia: Could Modernization Be Democratic?

Vladimir Gel'man is a Professor at the Department of Political Science and Sociology, European University at St.Petersburg, and Finland Distinguished Professor at the Aleksanteri Institute, University of Helsinki. He is an author and editor of more than twenty books in Russian and in English, including The Politics of Sub-National Authoritarianism in Russia (Ashgate, 2010), ). He was also a visiting professor at the University of Texas at Austin, the Central European University, Budapest, and the New Economic School, Moscow, and published numerous book chapters and journal articles in Europe-Asia Studies, Post-Soviet Affairs, International Political Science Review, Democratization and others.