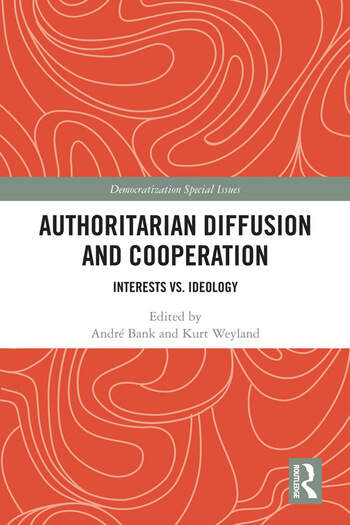 To shed light on the global reassertion of authoritarianism in recent years, this volume analyses transnational diffusion and international cooperation among non-democratic regimes. How and with what effect do authoritarian regimes learn from each other? For what purpose and how successfully do they cooperate? The volume highlights that present-day autocrats pursue mainly pragmatic interests, rather than ideological missions. Consequently, the connections among authoritarian regimes have primarily defensive purposes, especially insulation against democracy promotion by the West. As a result, the authors do not foresee a major recession of democracy, as occurred with the rise of fascism during the interwar years.

The chapters in this book were originally published in a special issue of Democratization.

1. Autocratic diffusion and cooperation: the impact of interests vs. ideology

2. Fascism’s missionary ideology and the autocratic wave of the interwar years

3. Hugo Chávez and the diffusion of Bolivarianism

4. Creating the enemy, constructing the threat: the diffusion of repression against the Muslim Brotherhood in the Middle East

6. The limited reach of authoritarian powers

7. The study of authoritarian diffusion and cooperation: comparative lessons on interests versus ideology, nowadays and in history

André Bank is a Senior Research Fellow at the German Institute of Global and Area Studies (GIGA). He has published on authoritarianism and conflict in the Middle East.

Kurt Weyland is the Mike Hogg Professor in Liberal Arts at the University of Texas at Austin, USA. He has published extensively on democratisation, populism, and policy diffusion in Europe and Latin America.