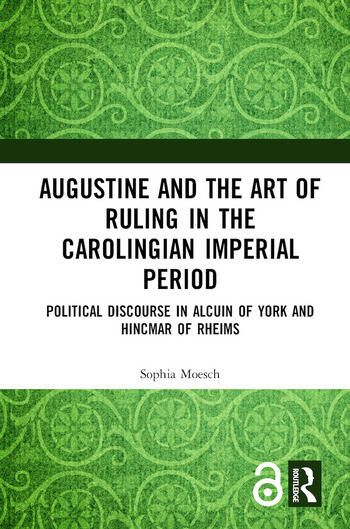 Augustine and the Art of Ruling in the Carolingian Imperial Period (Open Access): Political Discourse in Alcuin of York and Hincmar of Rheims

The Open Access version of this book, available at http://www.tandfebooks.com/doi/view/10.4324/9781351116022, has been made available under a Creative Commons Attribution-Non Commercial-No Derivatives 4.0 licence.

Published with the support of the Swiss National Science Foundation.

This volume is an investigation of how Augustine was received in the Carolingian period, and the elements of his thought which had an impact on Carolingian ideas of ‘state’, rulership and ethics. It focuses on Alcuin of York and Hincmar of Rheims, authors and political advisers to Charlemagne and to Charles the Bald, respectively. It examines how they used Augustinian political thought and ethics, as manifested in the De civitate Dei, to give more weight to their advice. A comparative approach sheds light on the differences between Charlemagne’s reign and that of his grandson. It scrutinizes Alcuin’s and Hincmar’s discussions of empire, rulership and the moral conduct of political agents during which both drew on the De civitate Dei, although each came away with a different understanding. By means of a philological–historical approach, the book offers a deeper reading and treats the Latin texts as political discourses defined by content and language.

I. Augustine of Hippo

Influences on the ‘De Civitate Dei’

Alcuin of YorkAlcuin’s Direct Use of Augustine in the ‘Epistolae’

Alcuin’s Indirect Use of Augustine: His Stance on Worldly Rule and Recourse to Augustine’s Terminology

Hincmar’s Direct Use of Augustine in the ‘Epistolae’

is currently an SNSF-funded postdoctoral fellow at the University of Oxford, working on a project entitled ‘Developing Principles of Good Governance: Latin and Greek Political Advice during the Carolingian and Macedonian Reforms’. She completed her PhD in History at King’s College London.

Augustine and the Art of Ruling in the Carolingian Imperial Period (Open Access): Political Discourse in Alcuin of York and Hincmar of Rheims