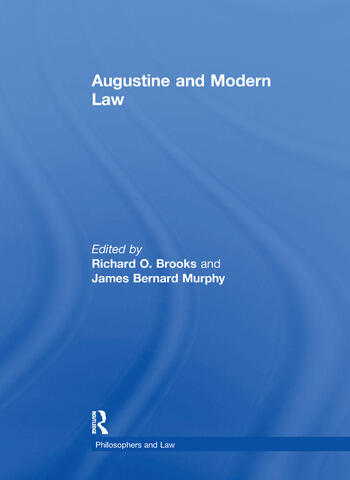 St. Augustine and Roman law are the two bridges from Athens and Jerusalem to the world of modern law. Augustine's almost eerily modern political realism was based upon his deep appreciation of human evil, arising from his insights into the human personality, the product of his reflections on his own life and the history of his times. These insights have traveled well through the ages and are mirrored in the pages of Aquinas, Luther and Calvin, Reinhold Niebuhr, and Hannah Arendt. The articles in this volume describe the life and world of Augustine and the ways in which he conceived both justice and law. They also discuss the little recognized Augustinian contributions to the field of modern hermeneutics - the discipline which informs the art of legal interpretation. Finally, they include Augustine's valuable discussion of church/state relations, the law of just wars, and proper role and limits of coercion, and the procreative dimensions of marriage. The volume also includes an extremely useful, definitive bibliography of Augustine and the law, and will leave readers with an increased appreciation of the contributions which Augustine has made to the history of jurisprudence. No one can read Augustine and these articles on his view of the law without taking away a new view of the law itself.

’...will prove to be a useful reference work for anyone who seeks to bridge the artificial gap that has emerged between historical scholarship in theology and law.' Ephemerides Theologicae Lovanienses