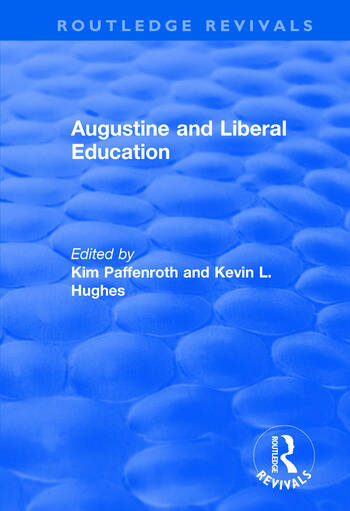 This title was first published in 2000:  Augustine of Hippo (354-430 CE) - Bishop, theologian, philosopher, and rhetorician - has left a rich legacy for reflection upon relationships between Christianity and culture, between Christian catechesis and liberal education, and between faith and reason. Contemporary educational institutions have begun to explore their roots, digging into their intellectual traditions for the resources for renewal of liberal education. Augustine and Liberal Education sheds light on liberal education past and present, from an Augustinian point of view. Ranging from historical investigations of particular themes and issues in the thought of Saint Augustine, to reflections on the role of tradition and community and the challenges and opportunities facing universities in the next century, the contributors return to the sources of traditional reflection whilst exploring contemporary issues of education and 'the good life'. Essays on Augustinian inquiry in medieval and modern eras address critical questions on the role of rhetoric, reading, and authority in education, on the social context of learning, and on the relationship between liberal education and properly Christian catechesis.

’These essays probe an important topic, and do so from an intriguing perspective - namely bringing Augustine into the conversation about the future of liberal education.’ Stanley J. Grenz, Carey Theological College, Canada ’.. this book tries to come to terms with a particular tradition of inquiry in the light of contemporary challenges to liberal education, through the renewal and reevaluation of Augustine's thought and writings. It is an interesting and thought-provoking volume, one that will have particular application to Catholic institutions of higher education, and even Protestant and secular colleges and universities as they seek to define what "liberal Education" means in today's society.’ Mystic Review June 2001 'The quality of the essays is remarkably uniform, and copious endnotes will please the serious scholar. This is a book that can be appreciated across the humanities, especially in a time when the mission and purpose of church-related education is under serious scrutiny. The essays are too sophisticated to suggest less than a nuanced reading of both Augustine and the current milieu.' The Journal of Early Christian Studies 'The loving and thoughtful study much in evidence in this work would have been appreciated by the person whose writings are honoured here.' The Heythrop Journal '... an interesting and thought-provoking volume...' bhsu.edu