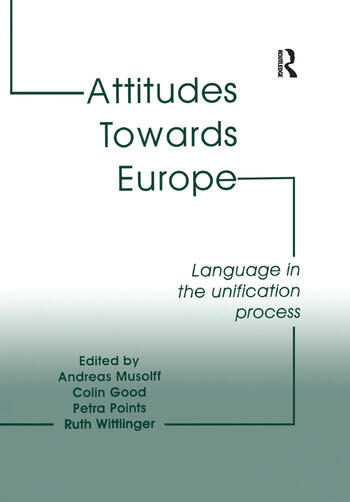 Attitudes Towards Europe: Language in the Unification Process

An innovative collaborative research project conducted jointly at Durham University and the Istitut fÃ¼r deutsche Sprache in Mannheim, Germany. It focuses on the study of public debates on economic and political integration of Europe, in both Britain and Germany and how these debates have developed in the post war period up to the 1990s. The following topics are investigated: Euro-discourse and the new media, British national identity in the European context, representations of Germany in the context of European integration in Margaret Thatcher’s autobiographies, European debates in post-World War II Germany, the European debate in and between Germany and Great Britain, the career of the neologism Euro in German Press Texts and the metaphorization of European politics. The study links to Internet implications, providing the basis for further contrastive and comparative research on public discourse in the field of European politics.

Contents: British Discourse on Europe: British national identity in the European context, Gerlinde Mautner; Representations of Germany in the context of European integration in Margaret Thatcher’s autobiographies, Ruth Wittlinger; A province of a federal super state, ruled by an unelected bureaucracy - keywords of the Euro-sceptic discourse in Britain, Wolfgang Teubert; German Discourse on Europe: Words, phases and argumentational structures in the German debate on Europe in the early post-war period, Heidrun KÃ¤mper; Euro: the career of a European neologism in German press texts (1995-1999), Dieter Herberg. Comparative Studies: The European debate in and between Germany and Great Britain, Colin Good; The metaphorization of European politics: movement on the road to Europe, Andreas Musolff; Attitudes to Europe - mediated by translation, Christina SchÃ¤ffner; Der Ton wird schÃ¤rfer. Stereotypes in media translation, Arachne van der Eijk-Spaan.

Attitudes Towards Europe: Language in the Unification Process