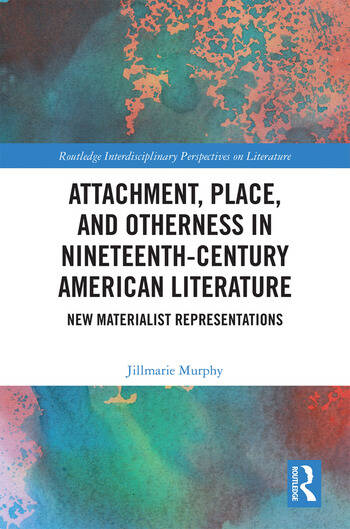 This interdisciplinary study examines the role interpersonal and place attachment bonds play in crafting a national identity in American literature. Although there have been numerous ecocritical studies of and psychoanalytic approaches to American literature, this study seeks to integrate the language of empirical science and the physical realities of place, while also investigating non-human agency and that which exists beyond the material realm. Murphy considers how writers in the early American Republic constructed modernity by restructuring representations of interpersonal and place attachments, which are subsequently reimagined, reconfigured, and sometimes even rejected by writers in the long nineteenth century. Within each narrative American perceptions of otherness are pathologized as a result of insecure human-to-human and human-to-place attachments, resulting in a restructuring of antiquated notions of difference. Throughout, Murphy argues that in order to understand fully the contextually varied framework of human bonding, it is important to emphasize America’s "attachment" to various constructions of otherness. Historically, people of color, women, ethnic groups, and lower class citizens have been relegated—socially, politically, and culturally—to a place of subordination. Refugees escaping the French and Haitian Revolutions to American cities encouraged writers to transform social, cultural, and political attachments in ways that the American Revolution did not. The United States has always been part of an extended global network that provides fertile ground from which to imagine a future American identity; this book thus gestures toward future readers, educators, and scholars who seek to explore new fields and new approaches to understand the underlying human motivations that continually inspire the American imagination.

Dispossession, Diseased Attachments, and the Transmogrifying Self in Charles Brockden Brown’s Arthur Mervyn

Fugitivity and Displaced Bodies in Leonora Sansay’s Secret History; or, the Horrors of Saint Domingo

George Lippard’s Quaker City; or, The Monks of Monk Hall and the Transformational Place of Mid-Nineteenth Century Urban Fiction

Atavistic Attachments, Anti-Landscapes, and the Precarity of Place in Stephen Crane’s Maggie: A Girl of the Streets and Frank Norris’s McTeague

Jillmarie Murphy is Associate Professor of English and Director of the Gender, Sexuality, and Women’s Studies Program at Union College, Schenectady, NY. She has published books, journal articles, and essays that focus on Puritan poetics, literature of the early American Republic, prominent and lesser-known antebellum literary figures, and transatlantic novelists who span the nineteenth and early twentieth centuries. Her publications generally employ the psycho-social paradigm of attachment theory, drawing on topics considering parenting, gender, race, class, and ethnicity, as well as publications that consider the evolution of literary history and how certain authors and texts resonate long after their heyday.