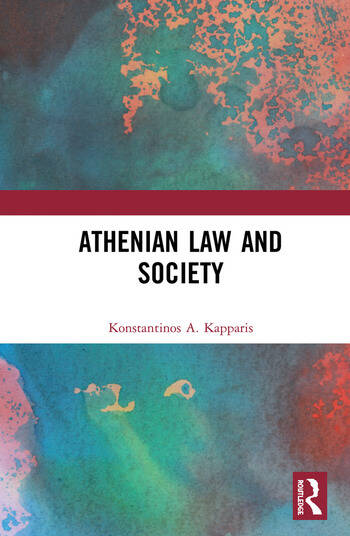 Athenian Law and Society focuses upon the intersection of law and society in classical Athens, in relation to topics like politics, class, ability, masculinity, femininity, gender studies, economics, citizenship, slavery, crime, and violence. The book explores the circumstances and broader context which led to the establishment of the laws of Athens, and how these laws influenced the lives and action of Athenian citizens, by examining a wide range of sources from classical and late antique history and literature. Kapparis also explores later literature on Athenian law from the Renaissance up to the 20th and 21st centuries, examining the long-lasting impact of the world’s first democracy.

Athenian Law and Society is a study of the intersection between law and society in classical Athens that has a wide range of applications to study of the Athenian polis, as well as law, democracy, and politics in both classical and more modern settings.

The development of Athenian law

Scholarship on Athenian law and society

Chapter 1. The administration of justice in the Polis

1.2 The division of powers in the Athenian Democracy

1.3 The question on the rule of law in the Athenian Democracy

1.4 Accountability of officials and individuals before the law

1.6 Open Government in the Athenian Democracy

1.9 The "amateurism" of Athenian Law?

1.10 Rules of Evidence and the Rule of Law

1.11 Executive officers of the Athenian State

2.2. Citizenship in the Greek Polis

2.3. Introduction into the Citizen Body

2.4. The rights, privileges and duties of Athenian citizen men

3.3. The oikos and its members

Chapter 4. The formation and purpose of marriage: wives and concubines

4.2. The ever-shifting definition of marriage

Chapter 5. The continuation of the oikos: inheritance and succession

5.6. Wills and succession by adopted children

7.2. Assault and slander: violence in Athenian Law and life

Chapter 8. Religion, the state and the law

8.2. The intersection of religion and the law

8.3. State Religion, festivals and the law

Chapter 9. The safety net: Protecting those in need

9.2. Protecting legal minors and the elderly from abuse

9.4. Caring for the elderly

9.5. Income support for the poor and the needy

9.6. The Athenian healthcare system: Medical care and the law

Epilogue: Athenian law as the voice of the Democracy

Konstantinos A. Kapparis is UF Research Foundation Professor and Director of the Center for Greek Studies at the University of Florida, USA. He studied with D.M. MacDowell at the University of Glasgow. His research interests include the Attic Orators, Athenian Law, Greek and Roman Medical Authors, Women’s History and Gender Studies, and the Social History of the Graeco-Roman World. He has published a commentary on Apollodoros Against Neaira (and also an expanded Modern Greek commentary of the same speech), a monograph on Abortion in the Ancient World, a large volume on Prostitution in the Ancient Greek World, a co-authored volume entitled Legal Speeches of Democratic Athens, and he has co-edited a collection of the articles of D.M. MacDowell. He has also published a number of articles on topics such as prostitution, citizenship and immigration, gender studies, history of medicine and science, and textual criticism.