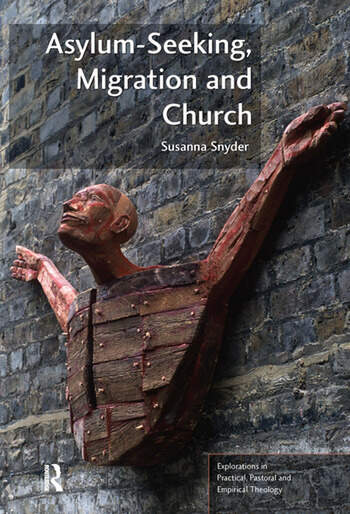 Asylum-Seeking, Migration and Church addresses one of the most pressing issues confronting contemporary society. How are we to engage with migrants? Drawing on studies of church engagement with asylum seekers in the UK and critical immigration and refugee issues in North America, Snyder presents an extended theological reflection on both the issue of asylum-seeking and the fears of established populations surrounding immigration. This book outlines ways in which churches are currently supporting asylum seekers, encouraging closer engagement with people seen as 'other' and more thoughtful responses to newcomers. Creatively exploring biblical and theological traditions surrounding the 'stranger', Snyder argues that as well as practising a vision of inclusive community churches would do well to engage with established population fears. Trends in global migration and the dynamics of fear and hostility surrounding immigration are critically and creatively explored throughout the book. Inviting more complex, nuanced responses to asylum seekers and immigrants, this book offers invaluable insights to those interested in Christian ethics, practical theology, social work, mission and faith and social action, as well as those working in the field of migration.

Susanna Snyder is Assistant Director, Catherine of Siena Virtual College, and Tutor in Theology at the University of Roehampton; previously Assistant Professor at the School of Social Work, University of Texas at Austin, USA. Her interest in immigration and religion began while she was a volunteer with Restore, an organization supporting asylum seekers in Birmingham, and her publications include articles in Journal of Refugee Studies and Studies in Christian Ethics. She holds degrees from the Universities of Cambridge and Birmingham and was a Post-Doctoral Fellow in the Initiative in Religious Practices and Practical Theology at Emory University between 2009 and 2010. Prior to that, between 2005 and 2008, she was a curate in North-East London. She is currently Co-Chair of the Religion and Migration Group at the American Academy of Religion.

’At the heart of the gospel is the challenge to see the face of Christ in the stranger, the migrant and the dispossessed. Susanna Snyder’s book begins from the stories of those displaced by the currents of globalization, and draws hope from their resilience as well as the actions of those called to be their hosts and advocates. Underpinning all this is a profound theological reflection on our shared humanity and the divine invitation to live as people of faith, not fear.’ Elaine Graham, University of Chester, UK ’As a migrant myself I deeply appreciate what Susanna Snyder has said about "flight" and "fright" as experiences shaping the migrants' self-identity and relations to the church. What makes Snyder's biblically-based reflections on migration so moving and transformative is their rootedness in her personal contacts with the migrants themselves, in their precariousness and vulnerability. I most strongly recommend this book not only to theology students but also to pastors, especially in the USA, where the number of migrants, documented and undocumented, is increasing exponentially. The book will help us make the church a welcoming home to migrants of all faiths.’ Peter C. Phan, Georgetown University, USA ’A comprehensive and compelling exploration of how people of faith are at the heart of forging a new imagination about migration. In naming the movement from an ecology of fear to an ecology of faith, Snyder challenges us to see the migrant not as a threat but a gift to community. She highlights not only how the Church is reaching out to immigrants but how immigrants are transforming the Church.’ Daniel Groody, University of Notre Dame, USA 'Since migration is an important contemporary social issue that is increasingly being politicised, it is vital that the Church knows how to respond. Snyder’s book offers a timely contribution to this debate by exploring these issues from a Christian faith perspective, and recognising that encounters with th