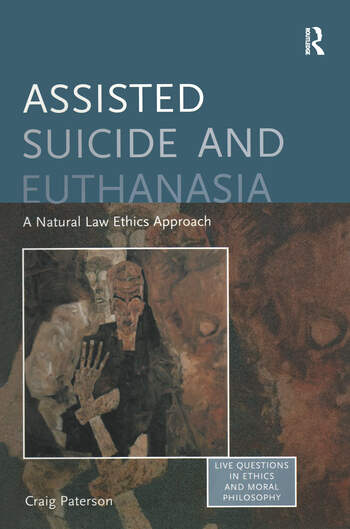 As medical technology advances and severely injured or ill people can be kept alive and functioning long beyond what was previously medically possible, the debate surrounding the ethics of end-of-life care and quality-of-life issues has grown more urgent. In this lucid and vigorous book, Craig Paterson discusses assisted suicide and euthanasia from a fully fledged but non-dogmatic secular natural law perspective. He rehabilitates and revitalises the natural law approach to moral reasoning by developing a pluralistic account of just why we are required by practical rationality to respect and not violate key demands generated by the primary goods of persons, especially human life. Important issues that shape the moral quality of an action are explained and analysed: intention/foresight; action/omission; action/consequences; killing/letting die; innocence/non-innocence; person/non-person. Paterson defends the central normative proposition that ’it is always a serious moral wrong to intentionally kill an innocent human person, whether self or another, notwithstanding any further appeal to consequences or motive’.

'At a time when the issues of euthanasia and assisted suicide are before legislators and the courts, and when public debate is dominated by religious advocates and anti-religious secularists, it is particularly welcome to have a careful and well constructed presentation of a purely philosophical defence of the idea that it is always wrong to intentionally kill an innocent person as a means to an end, even an otherwise benign one. Craig Paterson sets out an account of moral reasoning that is of broad interest and shows how it can be applied in cases relating to the end of life. A very clear, useful and timely contribution.' John Haldane, University of St Andrews, UK 'There are few more significant contemporary public policy debates than the debate about whether voluntary euthanasia and/or physician-assisted suicide should be decriminalised. Sadly, much of the literature amounts to little more than an emotional polemic in favour of decriminalisation; there are relatively few books which advance a philosophical case against decriminalisation. This is one of the few. Building on the recent renaissance of natural law theory, the book advances a serious, secular natural law argument against decriminalisation. Not all its arguments will attract universal assent (even from natural law theorists) but the book is, nevertheless, a welcome contribution to the debate.' John Keown, Rose F. Kennedy Professor of Christian Ethics, Georgetown University, USA 'Dr. Paterson is writing on a question of undoubted practical importance - and considerable theoretical importance as well. His argument is dispassionate, thorough, theoretically sophisticated, and usually convincing. In the course of making his case against euthanasia and assisted suicide, he makes a provocative case for a determinedly secular version of natural law. I highly recommend the book to all those interested in either bioethics or natural law moral theory.' Professor Philip Devine, Providence College, USA