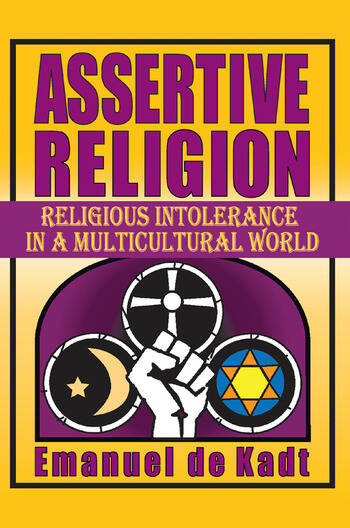 Questions about religions and religious institutions have changed dramatically since they first arose many years ago. In the beginning of the twenty-first century, the link of religion with extreme ideologies captures our attention. Such questions have been the focus of a steadily growing number of books. What does Assertive Religion add to the debate?

Emanuel de Kadt discusses the relationship of religion to wider social issues such as human rights and multiculturalism. He traces the growth, during the religious revival over the past decades, of assertive, and even coercive, forms of religion, notably but not exclusively fundamentalist varieties. He deals with these questions as they relate to the three major Abrahamic religions, thereby addressing a readership wider than that made up of persons interested exclusively in Judaism, Christianity, or Islam.

The author takes on issues such as the effects of the "Jewishness" of Israel on the rights of Palestinians; the consequences of the centralized authority structure of the Roman Catholic Church; and the implications of the failure of reform-oriented Muslims to make their voices heard in an organized Islamic reform movement. He is even-handed, focusing on both positive and negative features of each religious perspective, though he does have a clear viewpoint. Assertive Religion adds to increasingly sharp political discussions on issues arising out of religion. It is a must read for anyone interested in how religion is shaping the world of tomorrow.

Preface
[1]Introduction: A Modest Link with Major Predecessors
[2]Abusing Cultural Freedom: Coercion in the Name of God
1. Coercive uses of culture
2. Religions and believers
3. Coercive ideologies are alike
4. Why is coercive religion on the rise?
5. The slippery slope to religious extremism
6. Can the threat from coercive religions be tackled?
[3]Modernity and Multiculturalism: The Growing Impact of Religion
1. Modernity, secularization, and religious revival
2. Multiculturalism: solution or problem?
3. Case studies
4. Cultures, civilizations, and religion
5. Where does this leave us with multiculturalism?
[4]Religion and Human Rights
1. Setting the scene
2. Religion: some broader issues of relevance
3. Human Rights
4. The Abrahamic religions and Human Rights
5. Implications
[5]Religion and Authority: The Case of the Roman Catholic Church
1. Introduction
2. The innovative ideas of the 1960s
3. Humanae Vitae: the beginning of the reaction
4. Authority emerges as the touchstone of the possible
5. Futile Latin American challenges to authority
6. The issue is settled
[6]Islam: Fundamentalism in Mainstream Clothing?
1. Sunni and Shi'a, Islam's two main strands
2. Are there three styles of Islam?
3. The conviction of superiority
4. Interpreting mainstream Islam
5. Islamic rules and gender
6. Modern approaches to Islam
7. Can Islam as a whole modernize?
[7]The Long Arm of Jewish Fundamentalism
1. How do we define fundamentalism for the Jewish case?
2. A brief comparative perspective: Judaism and Islam
3. A rapid historical overview of Jewish fundamentalism
4. The quietist Haredim in the Diaspora and Israel
5. The activists: Gush Emunim and the Land of Israel
6. Christian Zionism
7. The most extreme form: Kahane and Kach
8. Transmitting and disseminating the God-given truth
9. How fundamentalism affects Jewish life
10. The porous boundaries between fundamentalism, tradition, and reform
[8]Some Conclusions
Bibliography
Glossary
Index