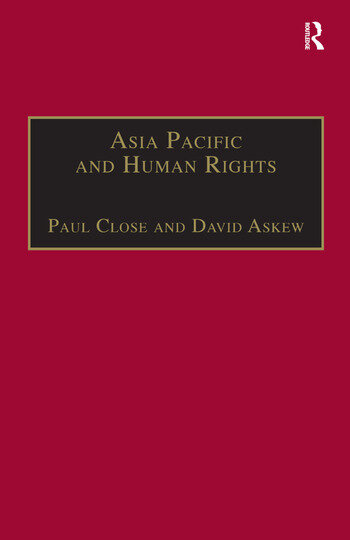 Human rights are acquiring an increasingly prominent role on the world stage. Interest in, concern about and action on human rights are widespread and rising, albeit in a far from globally even, uniform and untroubled fashion. Human rights have generated a booming global industry while having become, not unconnectedly, highly controversial and deeply contested. Human rights matters have emerged as a major source of disagreement, dispute and discord at and between the local, regional and global levels of social, cultural, political and economic life. These developments are addressed in the book by an examination of the links between the evolving global human rights regime (GHRR) and the character and course of human rights in the world's most dynamic, complex and problematic region, that of the Asia Pacific. The authors argue that although the Asia Pacific and human rights nexus is influenced by cultural clashes, it is largely shaped by power distributions and struggles rooted in the global political economy (GPE). The prevailing GHRR reflects the way in which globalization processes have been Western led, but its future is far from certain given the current shift in the balance of GPE power towards the Asia Pacific, and especially East Asia.

'Globalization has carried the modernist moral agenda that underpins the burgeoning human rights industry onto the contested terrain of the traditional values of the Asian Pacific region. Close and Askew's important book offers accessible, non-legalistic insights into the complexities of the evolving relationship between the human rights agenda, regional cultural traditions and the growing influence of the political economy of the Asian Pacific region on the world stage.' Gwen Wallace, Emeritus Professor, University of Derby, UK 'By forcefully arguing for the importance of power and culture in understanding human rights in the Asia Pacific, Close and Askew make a timely contribution to current debates on human rights. An impressive, critical analysis from a global political economy perspective is complemented by an empirically rich account of a broad range of human rights matters. The book invites readers to contemplate an intensification of contests over human rights as the Asia Pacific further advances its political economy status on the world stage.' Dr Xu Xin, Harvard University, USA.