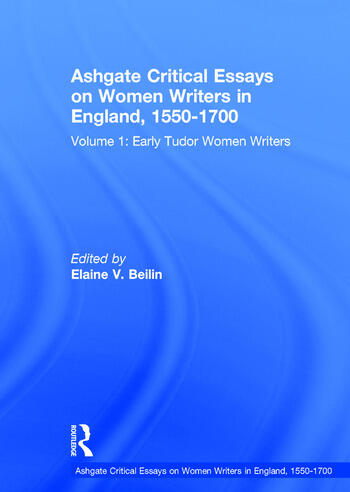 This volume includes leading scholarship on five writers active in the first half of the sixteenth century: Margaret More Roper, Katherine Parr, Anne Askew, Mildred Cooke Cecil and Anne Cooke Bacon. The essays represent a range of theoretical approaches and provide valuable insights into the religious, social, economic and political contexts essential for understanding these writers' texts. Scholars examine the significance of Margaret More Roper's translations and letters in the contexts of humanism, family relationships and changing cultural forces; the contributions of Katherine Parr and Anne Askew to Reformation discourses and debates; and the material presence of Mildred Cooke Cecil and Anne Cooke Bacon in the intellectual, religious and political life of their time. The introduction surveys the development of the field as an interdisciplinary project involving literature, history, classics, religion and cultural studies.

'Beilin can be commended for bringing together a series of essays that demonstrate the complex social negotiations behind the writings produced by early modern women.' Gender and History