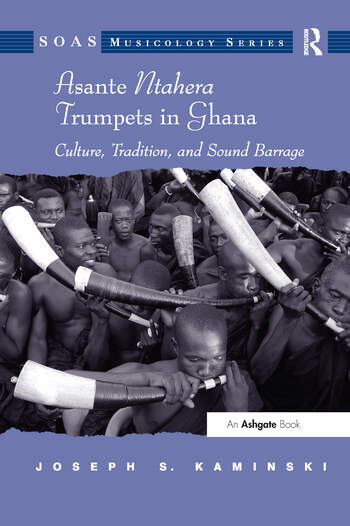 Based on the author's fieldwork in Ghana with the Asante and Denkyira ntahera trumpeters, this book draws on interviews, field recordings, oral traditions, written accounts, archaeological evidence, transcriptions and linguistic analyses to situate the Asante trumpet tradition in historical culture. There are seven ivory trumpet ensembles in residence at the Asante Manhyia Palace in Kumase, and ivory trumpets are blown at every Akan court. The Asante trumpets, which are made from elephant tusks, are symbols of Asante strength and have an important role in Asante cosmology. Surrogate speech is performed via lipped tones through a tusk in praise of the Asante royal ancestors and the living Asante king. This book contains transcriptions and analyses of surrogate speech texts and their accompanying ensemble songs. When several ensembles play simultaneously as a representation of power, they make staggered entrances, beginning separate songs in order. This results in a simultaneous performance of separate songs. This phenomenon, which Kaminski has termed 'sound-barrage', is an ancient aesthetic, and is performed to protect the kingdom and the ancestors. It is both spiritual and acoustical. This 'sound barrage' is believed to act in the metaphysical world, dispelling evil spirits from court rituals, ancestor venerations, and funerals, for there is a spirit in the sound.

Joseph S. Kaminski is a trumpeter who researched ntahera and other ivory trumpet music in Ghana. He first approached ethnomusicology as a musician, performing on cruise ships and touring the world for over a decade with orchestras and popular music groups. His Ph.D. in ethnomusicology is from Kent State University, with an M.A. from Hunter College, an M.M. from Manhattan School of Music, and a B.A. in anthropology from the College of Staten Island. He currently teaches World Music at the College of Staten Island, Long Island University, Wagner College, and Hudson County Community College, and he is active in various ethnic music performance practices in New York City.