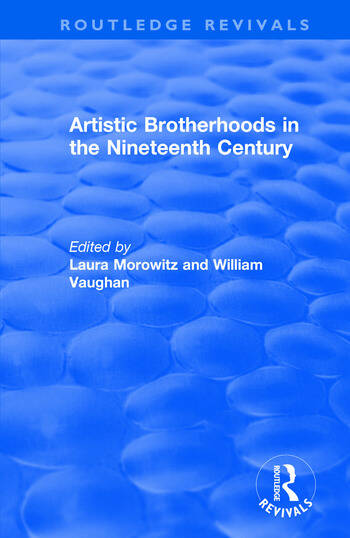 Artistic Brotherhoods in the Nineteenth Century

This title was first published in 2000. The nineteenth century saw the emergence of numerous artistic brotherhoods - groups of artists bound together in communal production, sharing spiritual and aesthetic aims. Although it is widely acknowledged that this is an unique feature of the period, there has not previously been a separate study of the phenomenon. This collection of essays provides a thorough and wide-ranging exploration of the issue. Situating artistic brotherhoods within their historical context, it offers unique insights into the social, political, economic and cultural milieu of the nineteenth century. It focuses on the most celebrated and influential brotherhoods, while also bringing to light lesser-known or forgotten artists. The essays explore the artistic fraternity from a wide variety of perspectives, probing issues of gender, identity, professional practices and artistic formation in Europe and the United States. This book investigates the Nazarenes, the Pre-Raphaelites, the Russian Abramatsova, the Primitifs, the Nabis as well as other leading groups. The book contains a substantial introduction, which establishes the key questions and issues surrounding the phenomena of the artistic brotherhood, including their relation to the larger artistic community, their association with other social and political organizations of the period, and the ways in which mythologies have been built around them in subsequent histories and recollections of the period.

'... a particularly innovative text in its examination of the male, homosocial art world... With its careful attention to economic, social, cultural and social movements, this far-reaching, innovative collection of essays should appeal to a broad audience, ranging from those interested in art and art history to gender studies.'

Artistic Brotherhoods in the Nineteenth Century