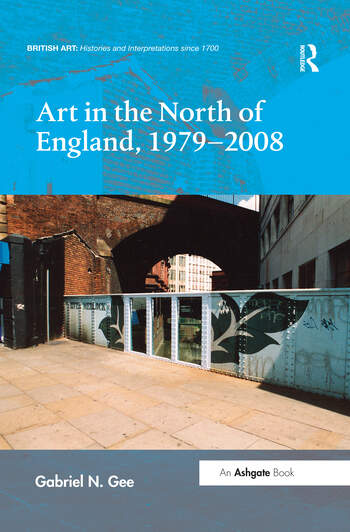 Based on rare archival material and numerous interviews with practitioners, Art in the North of England 1979-2008 analyses the relation between political and economic changes stemming from the 1980s and artistic developments in the principal cities of the North of England in the late 20th century. Looking in particular at the art scenes of Liverpool, Manchester, Leeds, Sheffield and Newcastle, Gabriel Gee unveils a set of powerful aesthetic reactions to industrial change and urban reconstruction during this period on the part of artists including John Davies, Pete Clarke, the Amber collective, Richard Wilson, Karen Watson, Nick Crowe & Ian Rawlinson, John Kippin, and the contribution of organisations such as Projects UK/Locus +, East Street Arts, the Henry Moore Sculpture Trust and the Bluecoat Gallery in Liverpool. While the geographical focus of this study is highly specific, a key concern throughout is the relationship between regional, national and international artistic practices and identities. Of interest to all scholars and students concerned with the developments of British art in the second half of the 20th century, the study is also of direct pertinence to observers of global narratives, which are here described and analysed through the concept of trans-industriality.

Chapter 1: the cloth cap and the red glove: politics and northern aesthetics in the 1980s

Chapter 2: Farewell to an industry

Chapter 5: A case for capital

Chapter 7: Do It Yourself: grassroots practices and diversification

"Gabriel Gee provides a timely and important contribution to the current focus on arts and visual culture in the north of England. He attends closely to the impact of successive waves of policy, funding and regeneration schemes since the 1980s, the development of cultural and creative strategies, and particular forms of resistance in key northern cities. This is most valuable historical research. The specific case studies and the material drawn from the extensive interviews with diverse actors over the recent decades all make for an absorbing read."

"This book is a very clear and comprehensively written historiographical overview of the production and consumption of contemporary visual arts in the North of England in the 1980s, 1990s and 2000s. ... Although the focus is on the past three decades, the author does not hesitate to recapture local events and developments in the eighteenth, nineteenth and early twentieth centuries, if necessary for a clear contextualization of a recent event, trend or other fact. They are sometimes the roots, a prelude or in fact, the opposite of a current development. This broader contextualization, which deepens insight into developments, is a strength of this publication. Another strength is the seemingly effortless embedding of this publication in a theoretical art historical context."

"Overall, Gabriel Gee’s Art in the North of England, 1979-2008 alleviates a dearth of books on the subject. ... It will prove an excellent read for those with an interest in the history of contemporary British art, as the author convincingly makes the case for the assertion, development and emancipation of the Northern artistic sphere through an array of innovative, challenging and mature artistic practices."