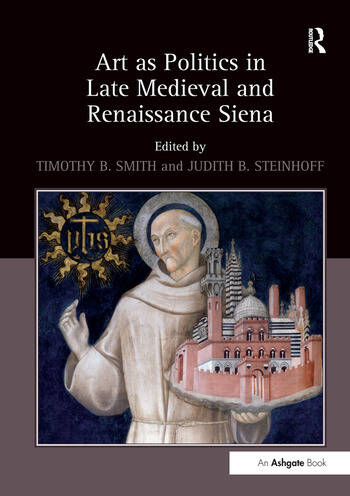 Art as Politics in Late Medieval and Renaissance Siena

Timothy B. Smith, Judith B. Steinhoff

In Art as Politics in Late Medieval and Renaissance Siena, contributors explore the evolving relationship between image and politics in Siena from the time of the city-state's defeat of Florence at the Battle of Montaperti in 1260 to the end of the Sienese Republic in 1550. Engaging issues of the politicization of art in Sienese painting, sculpture, architecture, and urban design, the volume challenges the still-prevalent myth of Siena's cultural and artistic conservatism after the mid fourteenth century. Clearly establishing uniquely Sienese artistic agendas and vocabulary, these essays broaden our understanding of the intersection of art, politics, and religion in Siena by revisiting its medieval origins and exploring its continuing role in the Renaissance.

Timothy B. Smith is an Associate Professor of Art History at Birmingham-Southern College, USA.

Judith B. Steinhoff is an Associate Professor of Art History at the University of Houston, USA.

'... valuable for expanding, or perhaps even changing, the lens through which Sienese art is viewed.' CAA Reviews

'Although addressing a wide range of topics, the essays are methodologically similar in their analysis of images, buildings, and forms as instruments of political agendas. The volume is coherent, a pleasure to read, and presents many new ideas about both major monuments and lesser-known works.' The Medieval Review

'Art as Politics in Late Medieval and Renaissance Siena makes bold moves. One would not expect a book by that title to steer around perhaps the most famously political images of premodern Europe, the government allegories painted by Ambrogio Lorenzetti in Siena’s Palazzo Pubblico. Further, taking a cue from Chinese painting, editors Timothy Smith and Judith Steinhoff call for a nonlinear view of artistic development in Siena and a turn away from stylistic innovation as a primary qualification for Sienese objects of art historical study.' Studies in Iconography

Art as Politics in Late Medieval and Renaissance Siena