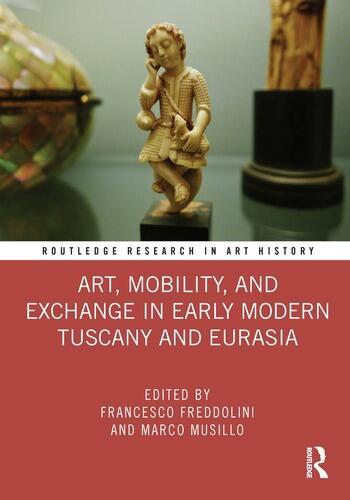 Art, Mobility, and Exchange in Early Modern Tuscany and Eurasia

This book explores how the Medici Grand Dukes pursued ways to expand their political, commercial, and cultural networks beyond Europe, cultivating complex relations with the Ottoman Empire and other Islamicate regions, and looking further east to India, China, and Japan.

The chapters that follow show how casting a global, cross-cultural net was part and parcel of the Medicean political vision. Diplomatic gifts, items of commercial exchange, objects looted at war, maritime connections, and political plots were an inherent part of how the Medici projected their state on the global arena. The volume shows that the mobility of objects, people, and knowledge that generated the global interactions we explore was not unidirectional – rather, they went both to and from Tuscany. Several chapters explore evidence of objects produced in Tuscany for Asian markets and reveal hitherto neglected histories of how Western cultures projected themselves eastwards.

The book will be of interest to scholars working in art history, early modern history, material culture, and Renaissance studies.

2. To the Victor Go the Spoils: Christian Triumphalism, Cosimo I de’ Medici and the Order of Santo Stefano in Pisa

3. Medici Patronage and Exotic Collectibles in the Seventeenth Century: the Cospi Collection

4. Disembedding the Market: Commerce, Competition, and the Free Port of 1676

6. Ginori Porcelain: Florentine Identity and trade with the Levant

7. Of Rhinos, Peppercorns, and Saints: (Re)presenting India in Medici Florence

10. The Russian Fata Morgana of Cosimo III: The Fluctuating Portraits of Kangxi between Florence and Beijing

11. Postscript. Textual Threads and Starry Messengers: The Global Medici from the Archive to the Fondaco

Marco Musillo is an independent researcher.

Art, Mobility, and Exchange in Early Modern Tuscany and Eurasia