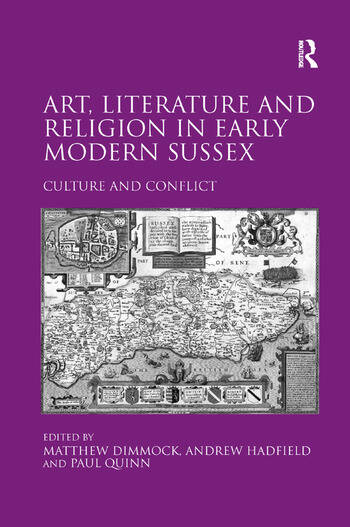 Art, Literature and Religion in Early Modern Sussex is an interdisciplinary study of a county at the forefront of religious, political and artistic developments in early-modern England. Ranging from the schism of Reformation to the outbreak of Civil War, the volume brings together scholars from the fields of art history, religious and intellectual history and English literature to offer new perspectives on early-modern Sussex. Essays discuss a wide variety of topics: the coherence of a county divided between East and West and Catholic and Protestant; the art and literary collections of Chichester cathedral; communities of Catholic gentry; Protestant martyrdom; aristocratic education; writing, preaching and exile; local funerary monuments; and the progresses of Elizabeth I. Contributors include Michael Questier; Nigel Llewellyn; Caroline Adams; Karen Coke; and Andrew Foster. The collection concludes with an Afterword by Duncan Salkeld (University of Chichester). This volume extends work done in the 1960s and 70s on early-modern Sussex, drawing on new work on county and religious identities, and setting it into a broad national context. The result is a book that not only tells us much about Sussex, but which also has a great deal to offer all scholars working in the field of local and regional history, and religious change in England as a whole.