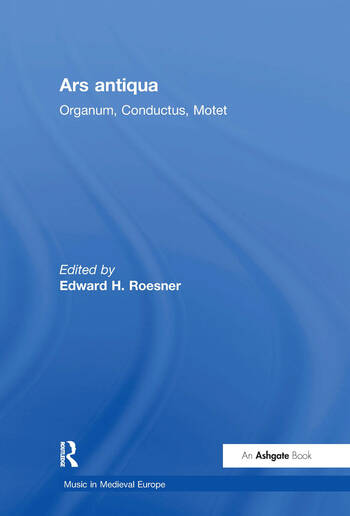 The ars antiqua began to be mentioned in writings about music in the early decades of the fourteenth century, where it was cited along with references to a more modern "art", an ars nova. It was understood by those who coined the notion to be rooted in the musical practices outlined in the Ars musica of Lambertus and, especially, the Ars cantus mensurabilis of Franco of Cologne. Directly or indirectly the essays collected in this volume all address one or more of the issues regarding ars antiqua polyphony-questions relating to the nature and definition of genre; the evolution of the polyphonic idiom; the workings of the creative process including the role of oral process and notation and the continuum between these extremes; questions about how this music was used and understood; and of how it fits into the intellectual life of the twelfth and thirteenth centuries. Some of the essays ask new questions or approach long-standing ones from fresh perspectives. All, however, are rooted in a line of scholarship that produced a body of writing of continuing relevance.

Contents: Introduction; Part I Polyphony at Notre Dame of Paris: Leoninus, poet and musician, Craig Wright; The origin and destination of the Magnus Liber Organi, Heinrich Husmann; The geography of the liturgy at Notre-Dame of Paris, Rebecca A. Baltzer. Part II Organum, Genre, Rhythm: Johannes de Garlandia on Organum in Speciale, Edward H. Roesner; The Copula according to Johannes de Garlandia, Jeremy Yudkin; Consonance and rhythm in the organum of the 12th and 13th centuries, Ernest H. Sanders; Who 'made' the Magnus Liber?, Edward H. Roesner; The Vatican organum treatise re-examined, Steven C. Immel; Interrelationships among the alleluias of the Magnus Liber Organi, Norman E. Smith; The abbreviation of the Magnus Liber, William G. Waite. Part III Conductus, Genre, Function, Rhythm: Musical declamation and poetic rhythm in an early layer of Notre Dame conductus, Janet Knapp; Conductus and modal rhythm, Ernest H. Sanders; Aurelianis civitas: student unrest in medieval France and a conductus by Philip the Chancellor, Thomas B. Payne. Part IV Motet, Chronology, Style: Aspects of trope in the earliest motets for the Assumption of the Virgin, Rebecca A. Baltzer; The question of Perotin's oeuvre and dates, Ernest H. Sanders; A small collection of Notre Dame motets ca. 1215-1235, Gordon A. Anderson; The rondeau motet: Paris and Artois in the 13th century, Mark Everist; Beyond glossing: the old made new in Mout me fu grief / Robin m'aime / Portare, Dolores Pesce; Index.

Edward Roesner is a medievalist working primarily with the music of the 12th, 13th, and early 14th centuries. After teaching at Indiana University and the University of Maryland, College Park, he joined the faculty at NYU in 1976 and has taught as a visiting professor at Princeton, Yale, and Harvard. He has been awarded fellowships by the Guggenheim Foundation and the American Council of Learned Societies, among other grants.

'...the introductions to each volume are excellent...' Early Music Review '...one of the best combinations of articles written in English..' The Medieval Review