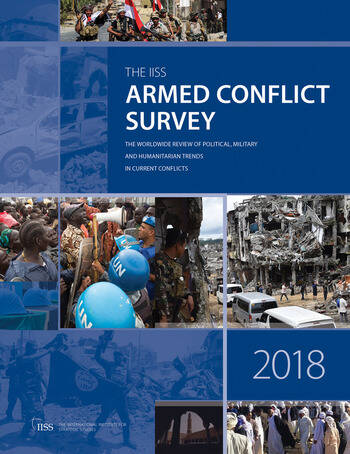 The Armed Conflict Survey provides in-depth analysis of the political, military and humanitarian dimensions of all major armed conflicts, as well as data on fatalities, refugees and internally displaced persons. Compiled by the IISS, publisher of The Military Balance, it is the standard reference work on contemporary conflict.

features essays by some of the world’s leading experts on armed conflict, including Mats Berdal, Elisabeth Jean Wood, Julia Bleckner, Nelly Lahoud, William Reno and Carrie Manning. They write on:

• the changing foundations of governance by armed groups; and

The authors’ discussion of principal thematic and cross-national trends complements the detailed analysis of each conflict at the core of the book.

also includes maps, infographics and multi-year data, as well as the IISS Chart of Conflict.

The Changing Foundations of Governance by Armed Groups

Territory lost by ISIS and operations against the group in

Distribution of highest reported level of rape during civil war

Democratic Republic of the Congo