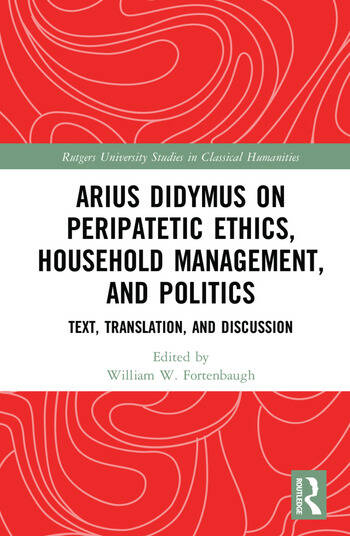 This volume features a unique epitome (original summation) of Aristotelian practical philosophy. It is often attributed to Arius Didymus who composed a survey of Peripatetic thought on three closely related areas: ethics, household management, and politics. The quality of the epitome, which draws not only on the surviving treatises of Aristotle, but also on works by later Peripatetics, is excellent.

In recent years the epitome has attracted increased attention as an important document for the understanding of Hellenistic philosophy. This new edition of the Greek text is much needed; the most recent edition dates from 1884 and is seriously faulty. This translation, provided by Georgia Tsouni, is based on the oldest and best manuscripts and takes account of recent discussions of difficult passages. In addition, an English translation appears opposite the Greek text on facing pages. The text-translation is followed by nine essays, which are written for a wide audience—not only philosophers and classicists, but also scholars interested in politics and social order.

The essays also consider issues of a more philological nature: Who in fact was the author of the epitome? Is Theophrastus an important source? In discussing political matters, is the author intending to defend the practice of philosophy in Augustan Rome? Was there a second epitome, perhaps with a different slant, that has been lost?

1 Didymus’ Epitome of Peripatetic Ethics, Household Management, and Politics: An Edition with Translation

2 The Quest for an Author

4 Intrinsic Worth of Others in the Peripatetic Epitome, Doxography C

5 Two Conceptions of "Primary Acts of Virtue" in Doxography C

6 Bodily and External Goods in Relation to Happiness

7 Didymus on Types of Life

8 Didymus’ Epitome of the Economic and Political Topic