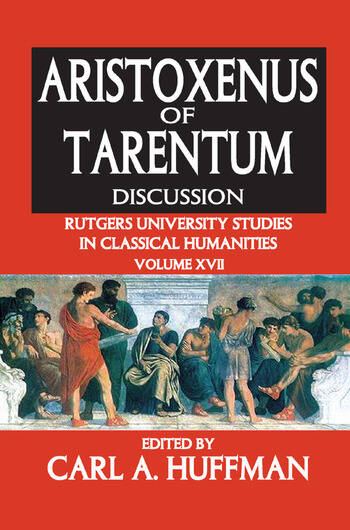 Aristoxenus of Tarentum: Texts and Discussion

Aristoxenus of Tarentum was reported to have been bitterly disappointed when Theophrastus was chosen instead of him to succeed Aristotle as the head of the Peripatetic School. He had a truly phenomenal output of some 453 volumes, most of which survive only in fragments. He was the most famous music theorist in antiquity and came to be referred to simply as "the musician." In addition, he was a founder of Greek biography and wrote the life histories of Pythagoras, Archytas, Socrates, and Plato among others.

This volume includes eleven selections, which are almost evenly divided between his work in music theory and biography. There is a chapter on his general biographical method as well as chapters on his specific treatments of the Pythagoreans, Socrates, and Plato. There are chapters evaluating the extent to which Aristoxenus was a historian of music, his account of music therapy, his views on musical "character," the use of instruments and empiricism in his harmonic theory, and his relation to the "Neoclassical" Greek composers of the fourth century.

Aristoxenus of Tarentum: Texts and Discussion