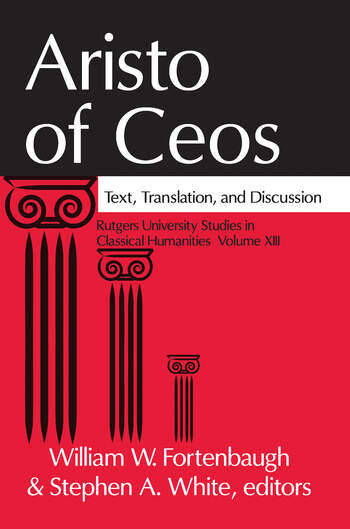 Volume 13 in the RUSCH series continues work already begun on the School of Aristotle. Volume 9 featured Demetrius of Phalerum, Volume 10, Dicaearchus of Messana, Volume 11, Eudemus of Rhodes, and Volume 12, both Lyco of Troas and Hieronymus of Rhodes. Now Volume 13 turns our attention to Aristo of Iulis on Ceos, who was active in the last quarter of the third century BCE. Almost certainly he was Lyco's successor as head of the Peripatetic School. In antiquity, Aristo was confused with the like-named Stoic philosopher from Chios, so that several works were claimed for both philosophers. Among these disputed works, those with Peripatetic antecedents, like Exhortations and Erotic Dissertations, are plausibly assigned to Aristo of Ceos. Other works attributed to the Peripatetic are Lyco (presumably a biography of Aristo's predecessor), On Old Age, and Relieving Arrogance.

Whether part of the last-named work or a separate treatise, Aristo's descriptions of persons exhibiting inconsiderateness, self-will, and other unattractive traits relate closely to the Characters of Theophrastus. In addition, Aristo wrote biographies of Heraclitus, Socrates, and Epicurus. We may be sure that he did the same for the leaders of the Peripatos, whose wills he seems to have preserved within the biographies.

The volume gives pride of place to Peter Stork's new edition of the fragments of Aristo of Ceos. The edition includes a translation on facing pages. There are also notes on the Greek and Latin texts (an apparatus criticus) and substantive notes that accompany the translation. This edition will replace that of Fritz Wehrli, which was made over half a century ago and published without translation.