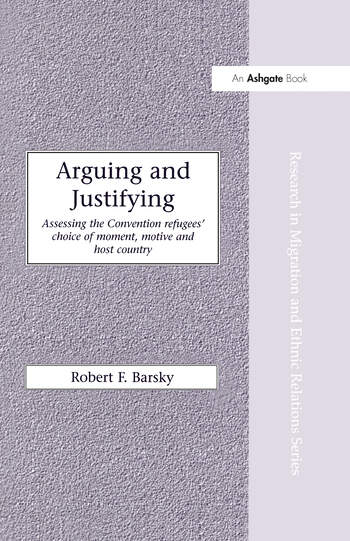 This is the first book of its kind to address the crucial issue of why people choose to make Convention refugee claims. It represents a substantial and original contribution primarily to the field of refugee studies but also applicable for a broader readership of political science, international studies, sociology, law, history and women’s studies. Furthermore, it theorizes the problems that face refugees by discussing the perception of the possible host countries. The conclusions of the book bear directly upon contemporary issues in refugee studies that suggest refugees move on the basis of (generally) extreme levels of persecution.

Contents: Introduction; Interpreting refugee discourse: from discourse analysis to inter-cultural communication; Claimants from the former Soviet Union: from European standards to the American dream; Claimants from Israel: a threat to the Jewish Identity?; Claimants from Peru: persecution in America and flight to Canada; Claimants from Pakistan: the constraints of state intervention; Conclusion: theorizing the obstacles to female claims; Bibliography; Appendices; Index.

’This is a most original piece of work, impossible to pigeonhole by genre. It is everywhere touched by passion and a kind of ethical anger that can make even the most difficult research data seductive...Informing Barsky’s argument throughout is his wide reading in social, linguistic and literary theory. He draws on Marc Angenot, Chomsky and Bakhtin, especially, to make a powerful argument for the role of narrative construction in the hearings he describes. He articulates a discourse theory that will be of interest not only to those directly involved with refugee issues, but to those pursuing literary theory, sociolinguistics, postcolonial studies, as well as those working in law and literature.’ Michael Holquist, Yale University, USA ’...identifies some key and quite disturbing policy concerns in the field of refugee studies.’ Ethnic and Racial Studies 'Barksy's approach in general is refreshingly eclectic. He blends legal thought, literary criticism and discourse analysis, with a powerful moral outrage...The book will be of interest to a wide range of scholars and professionals working with asylum issues...' Journal of Refugee Studies 'Barsky's book offers radical and efficient critique of the legal structures which lock refugees into a state of vulnerability and powerlessness...Breaking inter-disciplinary barriers, Barsky opens the way to new and profitable research directions...the refugees' narratives...are lively and informative. An extensive bibliography by topics, as well as a list of refugee organizations and documentation centers around the world bring added value to an already interesting work.' Asian and Pacific Migration Journal