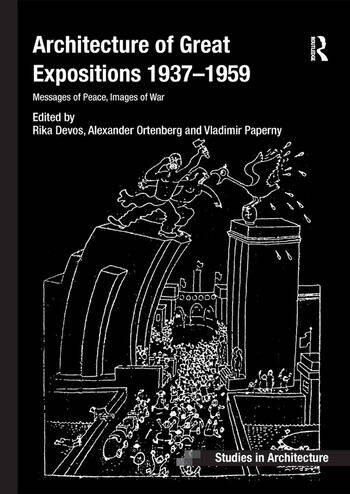 Architecture of Great Expositions 1937-1959: Messages of Peace, Images of War

This book investigates architecture as a form of diplomacy in the context of the Second World War at six major European international and national expositions that took place between 1937 and 1959. The volume gives a fascinating account of architecture assuming the role of the carrier of war-related messages, some of them camouflaged while others quite frank. The famous standoffs between the Stalinist Russia and the Nazi Germany in Paris 1937, or the juxtaposition of the USSR and USA pavilions in Brussels 1958, are examples of very explicit shows of force. The book also discusses some less known - and more subtle - messages, revealed through an examination of several additional pavilions in both Paris and Brussels; of a series of expositions in Moscow; of the Universal Exhibition in Rome that was planned to open in 1942; and of London’s South Bank Exposition of 1951: all of them related, in one way or another, to either an anticipation of the global war or to its horrific aftermaths. A brief discussion of three pre-World War II American expositions that are reviewed in the Epilogue supports this point. It indicates a significant difference in the attitude of American exposition commissioners, who were less attuned to the looming war than their European counterparts. The book provides a novel assessment of modern architecture’s involvement with national representation. Whether in the service of Fascist Italy or of Imperial Japan, of Republican Spain or of the post-war Franquista regime, of the French Popular Front or of socialist Yugoslavia, of the arising FRG or of capitalist USA, of Stalinist Russia or of post-colonial Britain, exposition architecture during the period in question was driven by a deep faith in its ability to represent ideology. The book argues that this widespread confidence in architecture’s ability to act as a propaganda tool was one of the reasons why Modernist architecture lent itself to the service of such different masters.

Rika Devos is assistant professor at the BATir-AIA department, Université libre de Bruxelles (Belgium), where she teaches post-war history of construction and architecture, theory of architecture and design studio. Trained as an engineer architect, she obtained her Ph.D in 2008 with a dissertation entitled Modern at Expo 58. Discussions on post-war representation (Ghent University). Rika Devos’ research focuses on exhibition architecture and post-war architecture and construction history. In 2006, she co-edited Pour un monde plus humain. L’architecture moderne Ã  l’Expo 58. She participates in international congresses on architecture and construction history and contributed to books and international journals such as Construction History, ICE Engineering History and Heritage, Planning Perspectives, Le Culture della Tecnica, DASH, etc. Alexander Ortenberg earned his MArch from the Moscow Institute of Architecture and his PhD from UCLA. His research interests include the history of architectural practices, the history of representation, and the history of exposition architecture. His doctoral dissertation, Drawing Practices: The Art and the Craft of Architectural Representation, focuses on the emergence of American working drawings at the turn of the 20th century. His recent publications include 'Joy in the Act of Drawing: Maybeck’s Palace of Fine Arts,' published in JSAH in March 2011. He currently teaches architectural history and theory and design at California State Polytechnic University in Pomona. Vladimir Paperny received his MA in design from the Stroganov Art Academy in Moscow, and his PhD in Cultural Studies from the Russian State University for the Humanities. His PhD thesis, Architecture in the age of Stalin. Culture Two was published in Russian (Moscow, 1996, 2006) and in English (Cambridge University Press, 2003, 2011). Since moving to the US in 1981, Dr. Paperny was visiting professor at USC, Woodrow Wilson Center, and Bristol University, UK

Architecture of Great Expositions 1937-1959: Messages of Peace, Images of War