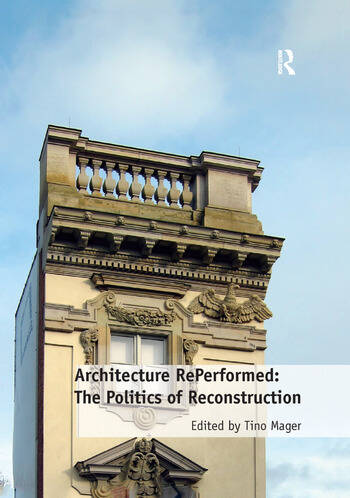 Architecture RePerformed: The Politics of Reconstruction

First emerging at the beginning of the twentieth century, architectural reconstruction has increasingly become an instrument to visually revive a long bygone past. This book deals with the phenomenon of meticulous reconstruction in architecture. It argues that the politics of reconstruction go far beyond aesthetic considerations. Taking architecture as a major source of history and regional identity, the impact of large-scale reconstruction is deeply intertwined with political and social factors. Furthermore, memories and associations correlated with lost buildings of a bygone era are heavily influenced by their re-appearance, something which often contradicts historical events. Reconstruction has become an established way of building and dealing with the past, yet so far, there is no comprehensive scientific study on it. By bringing together eight case studies from Eastern Europe, France, Spain, China, Japan, Israel and Brazil, it provides valuable insights into this topic. The chapters analyse the political background of the reconstructions and identify the protagonists. In doing so, this volume adds to our understanding of the impact of reconstruction to memory and oblivion, as well as the critical power of reconstruction regarding contemporary architecture and urbanism.

Tino Mager is an art- and architectural historian based in Berlin, Germany. His interdisciplinary research focuses on the notion of authenticity as well as on questions of memory regarding architectural heritage. Over the last few years he taught at Universities in Berlin and Istanbul and published various articles on transnational artistic education, 20th century architects and traditional Japanese architecture.

"Architects, planners and politicians who deal with historic buildings and styles are working now within a much more complex critical environment than ever before. This timely book captures the essentials of the debate with a selection of contemporary perspectives from around the world, offering a rich variety of voices in response to specific circumstances and histories." - Dr Timothy Brittain-Catlin, School of Architecture, University of Kent, UK

Architecture RePerformed: The Politics of Reconstruction