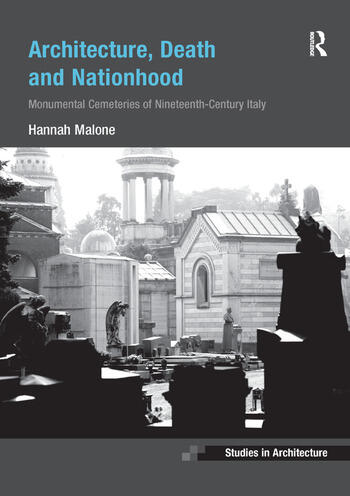 In the nineteenth century, new cemeteries were built in many Italian cities that were unique in scale and grandeur, and which became destinations on the Grand Tour. From the Middle Ages, the dead had been buried in churches and urban graveyards but, in the 1740s, a radical reform across Europe prohibited burial inside cities and led to the creation of suburban burial grounds. Italy’s nineteenth-century cemeteries were distinctive as monumental or architectural structures, rather than landscaped gardens. They represented a new building type that emerged in response to momentous changes in Italian politics, tied to the fight for independence and the creation of the nation-state.

As the first survey of Italy’s monumental cemeteries, the book explores the relationship between architecture and politics, or how architecture is formed by political forces. As cities of the dead, cemeteries mirrored the spaces of the living. Against the backdrop of Italy’s unification, they conveyed the power of the new nation, efforts to construct an Italian identity, and conflicts between Church and state. Monumental cemeteries helped to foster the narratives and mentalities that shaped Italy as a new nation.

Hannah Malone is a historian of architecture and modern Italy. After a doctorate at St John’s College Cambridge, she held a fellowship at the British School at Rome and studied fascist military cemeteries. As a Lumley Junior Research Fellow at Magdalene College Cambridge, she is currently working on the architect Marcello Piacentini.