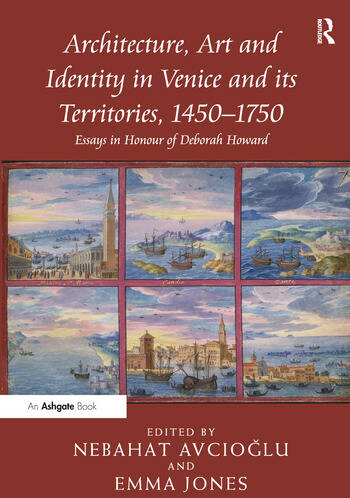 Architecture, Art and Identity in Venice and its Territories, 1450–1750: Essays in Honour of Deborah Howard

Cities are shaped as much by a repertoire of buildings, works and objects, as by cultural institutions, ideas and interactions between forms and practices entangled in identity formations. This is particularly true when seen through a city as forceful and splendid as Venice. The essays in this volume investigate these connections between art and identity, through discussions of patronage, space and the dissemination of architectural models and knowledge in Venice, its territories and beyond. They celebrate Professor Deborah Howard’s leading role in fostering a historically grounded and interdisciplinary approach to the art and architecture of Venice. Based on an examination and re-interpretation of a wide range of archival material and primary sources, the contributing authors approach the notion of identity in its many guises: as self-representation, as strong sub-currents of spatial strategies, as visual and semantic discourses, and as political and imperial aspirations. Employing interdisciplinary modes of interpretation, these studies offer ground-breaking analyses of canonical sites and works of art, diverse groups of patrons, as well as the life and oeuvre of leading architects such as Jacopo Sansovino and Andrea Palladio. In so doing, they link together citizens and nobles, past and present, the real and the symbolic, space and sound, religion and power, the city and its parts, Venice and the Stato da Mar, the Serenissima and the Sublime Port.

Emma Jones is a PhD Candidate in the Department of History of Art at the University of Cambridge, UK.

'Reflecting Deborah Howard’s own scholarly signature, this volume brings different fields of research -architecture, urban planning, landscape, art, music, politics, religion, society, and gender- into fruitful discussion. The essays collected here testify to the profound influence of Howard’s work on our understanding of architecture in Venice and its empire. Furthermore, they re-interrogate the complex issues that lie at the heart of her writings: interactions of power and culture, of arts and politics, of the transmission of ideas to and from Venice.' Giorgio Gianighian, Universita IUAV di Venezia, Italy

'Overall the collection is a fine testament to Howard’s impact in the field, and is not the only one. Another set of essays in her honor, Artistic Practices and Cultural Transfer in Early Modern Italy: Essays in Honour of Deborah Howard, was recently published by Ashgate (2015). Howard, a towering figure in the field, deserves all this recognition and more.' CAA reviews

'...focuses on monuments, places and patrons with a strong emphasis on architectural history in which Palladio plays the leading role.' Beverly Louise Brown, The Burlington Magazine

Architecture, Art and Identity in Venice and its Territories, 1450–1750: Essays in Honour of Deborah Howard