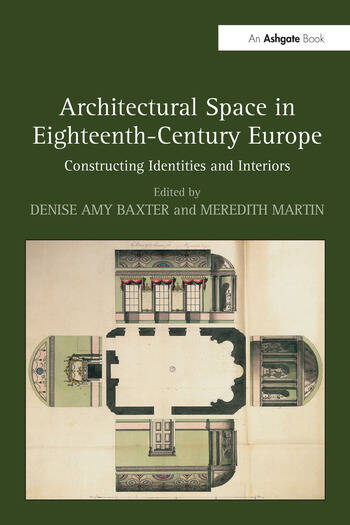 Architectural Space in Eighteenth-Century Europe: Constructing Identities and Interiors explores how a diverse, pan-European group of eighteenth-century patrons - among them bankers, bishops, bluestockings, and courtesans - used architectural space and décor to shape and express identity. Eighteenth-century European architects understood the client's instrumental role in giving form and meaning to architectural space. In a treatise published in 1745, the French architect Germain Boffrand determined that a visitor could "judge the character of the master for whom the house was built by the way in which it is planned, decorated and distributed." This interdisciplinary volume addresses two key interests of contemporary historians working in a range of disciplines: one, the broad question of identity formation, most notably as it relates to ideas of gender, class, and ethnicity; and two, the role played by different spatial environments in the production - not merely the reflection - of identity at defining historical and cultural moments. By combining contemporary critical analysis with a historically specific approach, the book's contributors situate ideas of space and the self within the visual and material remains of interiors in eighteenth-century Europe. In doing so, they offer compelling new insight not only into this historical period, but also into our own.

Denise A. Baxter is an Assistant Professor in the School of Visual Arts at the University of North Texas, USA. Meredith S. Martin is Assistant Professor of Eighteenth- and Nineteenth-Century Art in the History of Art Department at Wellesley College, USA.

'This fine collection of essays makes an important contribution to the literature on 18th-century architectural space as it was constructed and experienced across Europe... the essays uniformly move beyond questions of individual architects and period styles to consider issues of patronage and politics, class and gender.' Laura Auricchio, Parsons New School for Design, author of Adélaide Labille-Guiard: Artist in the Age of Revolution

'Architectural Space in Eighteenth-Century Europe invites readers to explore a glorious collection of environments, making a worthwhile contribution to our understandings of art and culture in the 1700s. Its wide-ranging essays should find a place on the ever-expanding bookshelf devoted to the physical spaces and social codes of eighteenth-century life.' Caa-Reviews

'The book contributes vitally to our understanding of eighteenth-century interiors, and its strength is that it conceptualizes the interior not just as pure space, but as space engaging and overlapping with other conceptions of interiority that derive from political, social, and psychic identities. It also displays how creative the study of interiors has become and the richness of the material available in that century.' Journal of the Society of Architectural Historians

'Architectural space in eighteenth-century Europe: Constructing identities and interiors is a major contribution to this flourishing project. It gathers a set of carefully researched case studies that represent a wide range of topics and perspectives... one of the strengths of the collection is the way it challenges the simplistic, anachronistic opposition often implied by the terms "public" and "private"... All of the essays are carefully researched, focused, interesting contributions to the cultural history of architecture and interiors.' Journal of Art Historiography