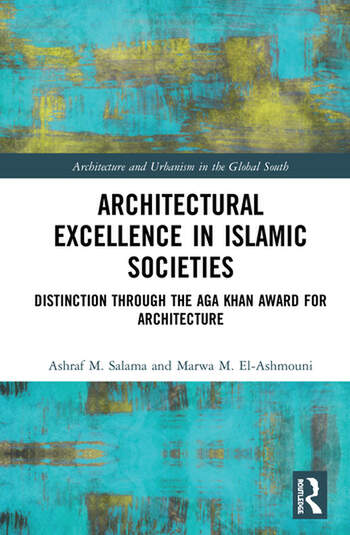 Architectural Excellence in Islamic Societies: Distinction through the Aga Khan Award for Architecture

This book discusses architectural excellence in Islamic societies drawing on textual and visual materials, from the Aga Khan Documentation Centre at MIT, developed over more than three decades. At the core of the discussion are the efforts, processes, and outcomes of the Aga Khan Award for Architecture (AKAA).

The AKAA recognises excellence in architectural and urban interventions within cities and settlements in the Islamic world which are continuously challenged by dramatic changes in economies, societies, political systems, decision making, and environmental requirements. Architectural Excellence in Islamic Societies responds to the recurring question about the need for architectural awards, arguing that they are critical to validating the achievements of professional architects while making their contributions more widely acknowledged by the public. Through analysis and critique of over sixty awarded and shortlisted projects from over thirty five countries, this book provides an expansive look at the history of the AKAA through a series of narratives on the enduring values of architecture; architectural and urban conservation; built environment sustainability; and architectural pluralism and multiple modernities.

will appeal to professionals and academics, researchers and upper-level students in architectural history and theory and built environment related fields.

Reinstating the Enduring Values of Architecture

From Restoration to Sustainable Urban Conservation

. is an Assistant Professor in the Department of Architectural Engineering, Beni-Suef University, Egypt. Dr. El-Ashmouni earned her degrees from The University of Adelaide, Australia and Ball State University, USA. El-Ashmouni was awarded the University of Adelaide Medal of Research Excellence (2013). Some of her publications is a book chapter in Christiane Gruber, ed. Islamic Architecture on the Move (2016), entitled: "Mobility and Ambivalences: Negotiating Architecture Identities during Khedive Ismail's Reign (1863-79)"

Architectural Excellence in Islamic Societies: Distinction through the Aga Khan Award for Architecture