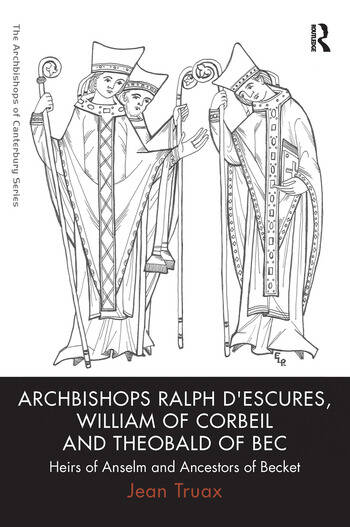 Archbishops Ralph d'Escures, William of Corbeil and Theobald of Bec: Heirs of Anselm and Ancestors of Becket

The first two archbishops of Canterbury after the Norman Conquest, Lanfranc and Anselm, were towering figures in the medieval church and the sixth archbishop, the martyred Thomas Becket, is perhaps the most famous figure ever to hold the office. In between these giants of the ecclesiastical world came three less noteworthy men: Ralph d'Escures, William of Corbeil, and Theobald of Bec. Jean Truax's volume in the Ashgate Archbishops of Canterbury Series uniquely examines the pontificates of these three minor archbishops. Presenting their biographies, careers, thought and works as a unified period, Truax highlights crucial developments in the English church during the period of the pontificates of these three archbishops, from the death of Anselm to Becket. The resurgent power of the papacy, a changed relationship between church and state and the expansion of archiepiscopal scope and power ensured that in 1162 Becket faced a very different world from the one that Anselm had left in 1109. Selected correspondence, newly translated chronicle accounts and the text and a discussion of the Canterbury forgeries complete the volume.

Contents: Part I The Archbishops and Their Careers: Introduction: the English Church as Anselm left it; Ralph d'Escures: a different kind of archbishop; The road to Rome: Ralph of Canterbury, Thurstan of York and the primacy dispute; Roman holiday: William of Corbeil and the Canterbury forgeries; Securing the future: William of Corbeil and the Anglo-Norman succession crisis; Juggling act: Archbishop, bishop, king, empress and pope; The limits of power: Archbishop Theobald and his neighbors; Trouble on the way: Theobald and the new regime; Conclusion: the world as Becket found it. Part II Appendices: Contemporary Documents; Bibliography; Index.

Jean Truax is an independent scholar who resides in Houston, Texas.

'An insightful new look at the three archbishops of Canterbury between Anselm and Becket: Ralph, William and Theobald, whose careers have never been considered together as a transition between two of Canterbury's greatest Medieval archbishops. Well written and thorough, this skillful scholarly account links the trends and traditions begun under Anselm as they were continued and carried out by his three immediate successors, preparing the ground for their dramatic culmination under Becket.' Sally N. Vaughn, University of Houston, USA ’This thorough and readable study of three twelfth- and thirteenth-century bishops of the English church moves easily back and forth between detail and examination of the historical context. Truax grounds her work solidly in documentary sources from the period, offering a rich picture of the period as well as unexpected familiarity with the lives and work of the bishops themselves.’ Marsha Dutton, Ohio University, USA 'Truax reminds us very successfully that the history of the church must be told not just through the stories of its bright stars and over-achievers such as Anselm and Becket, but equally by examining the experiences of its bumblers and bureaucrats.' Parergon ’...a very well-written and very useful teaching text, which by its very structure also invites scholars to consider their own views of the Anglo-Norman church.’ Catholic Historical Review 'Truax is at her best when she challenges the received interpretation of one of these archbishops ... She successfully documents the extraordinarily challenging job that these men faced ... Truax concludes by ... sketching the world Becket would inherit. It is a measure of the success of her efforts that, rather than anticipate the advent of that dramatic figure, the reader feels a pang of regret that these three men, so skilled in balancing the diverse challenges of their time, have left the stage.' English Historical Review

Archbishops Ralph d'Escures, William of Corbeil and Theobald of Bec: Heirs of Anselm and Ancestors of Becket